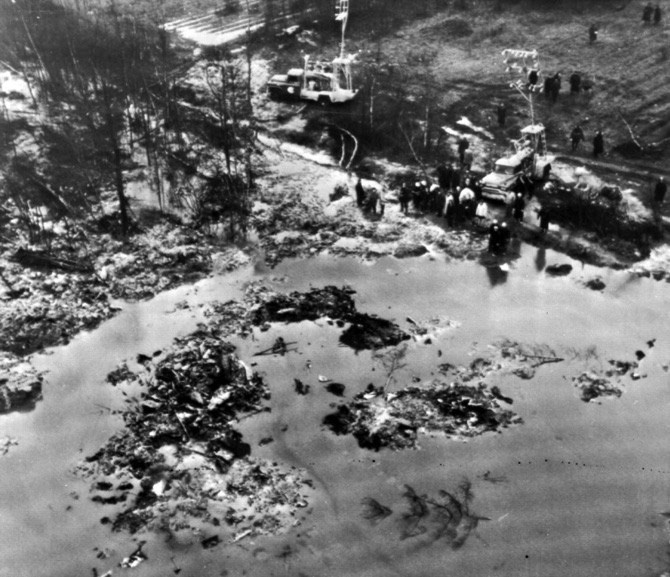 A Canadian jet has crashed within minutes of take-off, killing all 118 people on board.

The Trans-Canada Airlines DC8, bound for Toronto, crashed into a field, 20 miles from Montreal’s international airport at 0632 local time (2332 GMT).

A spokesman for the airline said there was no immediate explanation why the aircraft crashed and burst into flames four minutes after take-off.

He confirmed that all 111 passengers and seven crew died in the crash.

Eyewitnesses reported hearing an explosion as the plane hit the ground.

Manager of the Hillsdale Golf Club, Monty Adams, said: “It sounded like an explosion or an earthquake.

“The night watchman at the course heard it too. But there was no indication of where it came from.”

Parts of the wreckage were reported to be strewn across a wide area less than half a mile away (1km) from a main highway.

The aircraft was believed to be still burning two hours after the crash.

Rescue workers struggled to reach the jet because mud between the highway and the crash was at least a foot (0.3m) deep.

Quebec provincial police initially called for all ambulances to attend the scene but they were later cancelled after it was discovered that there were no survivors.

Police dogs were also sent to the scene to search for survivors but were then withdrawn when it became clear that there were none.

Canadian Transport Minister George McIlraith said investigators were on their way to the scene of the crash.

The accident comes just days after an identical TCA aircraft ran off the runway at London Airport.

An airline official said there was no connection between the two accidents.

Following the crash, investigators complained that looters stole wreckage from the plane and personal possessions from the dead passengers.

Rain was falling heavily at the time of the accident and this hindered the investigation when it turned to snow.

As a result the exact cause of the accident was never established.

Experts believe that the plane crash, which was one of Canada’s worst ever air disasters, may have resulted from a technical fault.