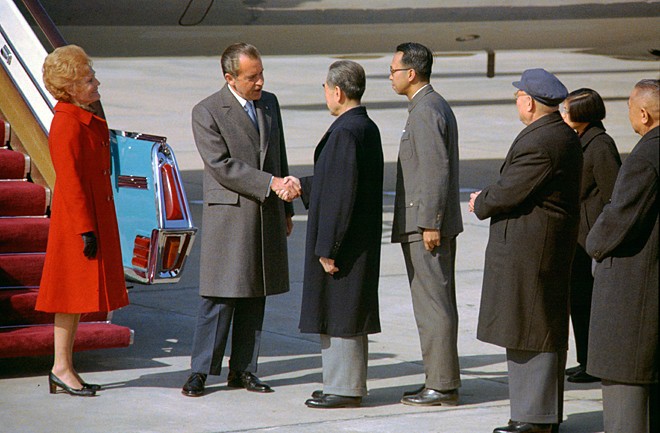 The American President Richard Nixon has arrived in China at the start of a week-long summit aimed at ending 20 years of frosty relations between the two countries.
His visit began with an unexpected audience with Chairman Mao Zedong at the leader’s home. Few details have been released, but officials said the one-hour meeting involved a “serious and frank discussion”.
After a modest reception at Peking airport, the president was formally welcomed at a lavish banquet held in the Great Hall of the People and hosted by Prime Minister Chou En-lai.
Mr Chou described Mr Nixon’s long journey to China as a “positive move” responding to the wishes of the peoples of both countries.
He hinted at the years of tension between China and the United States – largely due to American support for nationalists in Taiwan – and credited both governments for “common efforts” to open the gate to better contacts at last.
The president responded positively. “There is no reason for us to be enemies,” he said. “Neither of us seeks the territory of the other; neither of us seeks domination over the other; neither of us seeks to stretch out our hands and rule the world.”
Using one of Mao’s own quotations, Mr Nixon said it was time to seize the day and seize the hour “for our two peoples to rise to the heights of greatness which can build a new and better world”.
There followed an elaborate round of toasts, in which the 800 guests at the banquet wandered from table to table clinking thimble-sized glasses containing Chinese firewater.
Commentators said the elaborate banquet was in marked contrast to the coolness of the president’s reception at the airport.
This historic visit was engineered by the president’s national security adviser, Dr Henry Kissinger, during two visits to China last year. It is part of a policy of rapprochement aimed at restoring diplomatic relations between the two sides.

The BBC carried extended news bulletins of President Nixon’s ground-breaking visit to China – which included a walk along the Great Wall.
The Chinese people eagerly followed news of the visit and newspapers rapidly sold out.
The main diplomatic achievement of the visit was the Shanghai joint communiqué which declared Taiwan to be part of China.
Formal diplomatic relations were restored between the US and China in 1979 following a second communiqué which suggested a further weakening of US ties with Taiwan.
However, in the years since, Taiwan has remained a sticking point in relations. Different US administrations have chosen to maintain links with Taiwan by selling arms. President Bill Clinton attempted to persuade China to improve its human rights record by offering better trading conditions.
In February 2002, President George Bush visited China to mark the 30th anniversary of Nixon’s historic trip. The two countries continue to disagree over Taiwan.