This Day in History | 1973 – Thousands strike over pay and prices 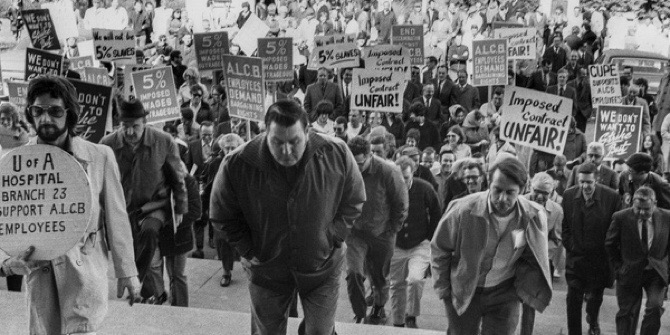 About 1.6 million workers joined the Trades Union Congress’ call for a one-day strike today in protest at the government’s pay restraint policy and price rises.

Despite the large turn-out many of the big unions voted against industrial action and thousands of workers carried on working when they could. Many were sent home as factories closed because essential staff were on strike and many more simply could not get to work due to transport problems.

Almost all rail services were disrupted or halted after the Associated Society of Locomotive Engineers and Firemen (Aslef) stopped work.

The much larger National Union of Railwaymen had voted against strike action but its members were unable to operate services with their Aslef co-workers.

The rail strike affected the Post Office and has resulted in a huge backlog of mail – even though members of the two largest Post Office unions did not join the day of action.

British Leyland car plants were severely hit by the strike by engineering workers in the Midlands, North-West and Scotland.

Vauxhall, Ford and Chrysler plants were also at a standstill losing the companies millions of pounds.

Other major engineering factories affected were Rolls-Royce at Bristol, GEC at Trafford Park, Manchester, Hawker Siddley and British Aircraft Corporation in the North-West and Dunlop tyres at Birmingham and Speke.

British Steel Corporation saw 30,000 of its 230,000 workers walk out and 113 of the National Coal Board’s 281 pits were on strike with further support for the action in South Wales and Scotland.

In Liverpool, the leader of the Transport and General Workers Union, Jack Jones, told supporters: “The government would be foolish to ignore the very sincere feelings not only of those protesting today but those millions of others who are fed up with the way prices are continuing to rise.”

A new round of talks is due to take place later this month between the government and the TUC over counter-inflation measures.

The then Conservative government under Edward Heath had a policy of limiting wage increases to control rising inflation.

This policy was legally enforced but under Harold Wilson’s Labour government which won the election of 1974, pay increases were limited by voluntary agreement with the unions.

That year, the Advisory Conciliation and Arbitration Service (Acas) was set up to help settle industrial disputes.

But food and house prices still managed to outstrip wage rises and labour unrest continued on into 1979 and the infamous “winter of discontent” when strikes crippled the country.

Prolonged industrial action discredited not only the unions but also the Labour Party with which they were associated. They had much to do with Labour losing the 1979 election leading to a prolonged period of Conservative rule under Margaret Thatcher.