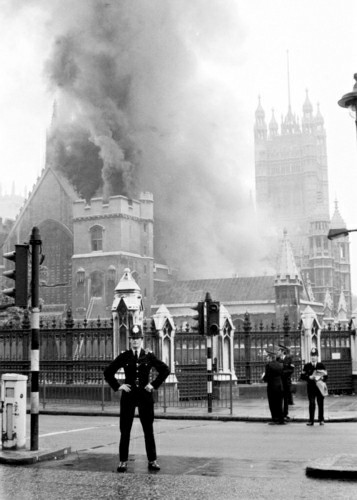 A bomb has exploded at the Houses of Parliament, causing extensive damage and injuring 11 people.
The IRA said it planted the 20 lb (9.1 kg) device which exploded at about 0828 BST in a corner of Westminster Hall.
The explosion is suspected to have fractured a gas main and a fierce fire spread quickly through the centuries-old hall in one of Britain’s most closely-guarded buildings.
Scotland Yard detectives have said they fear this attack could herald the start of a new summer offensive by the dissident Irish group on government buildings.
A man with an Irish accent telephoned the Press Association with a warning only six minutes before the explosion. Police said a recognised IRA codeword was given.
Although officers were not able to completely clear the palace before the bomb went off, most of the injured were only slightly hurt.
Leader of the Commons Edward Short announced a review of security procedures would begin immediately, but he said the attack would not disrupt parliamentary business or intimidate MPs.
Liberal Chief Whip David Steel was in the building when the device detonated and told the BBC the damage looked considerable.
“I looked through Westminster Hall and the whole hall was filled with dust. A few minutes later it was possible to see flames shooting up through the windows,” he said.

1974 was one of the deadliest years in the IRA’s mainland bombing campaign.
In February a bomb exploded on a coach carrying soldiers on the M62, killing 12 people.
A further 26 people died later in the year in attacks on the Tower of London and on pubs in Guilford and Birmingham.
The last Provisional IRA attack on the British mainland was in 1996, but extremist splinter groups have carried out bombings since then.