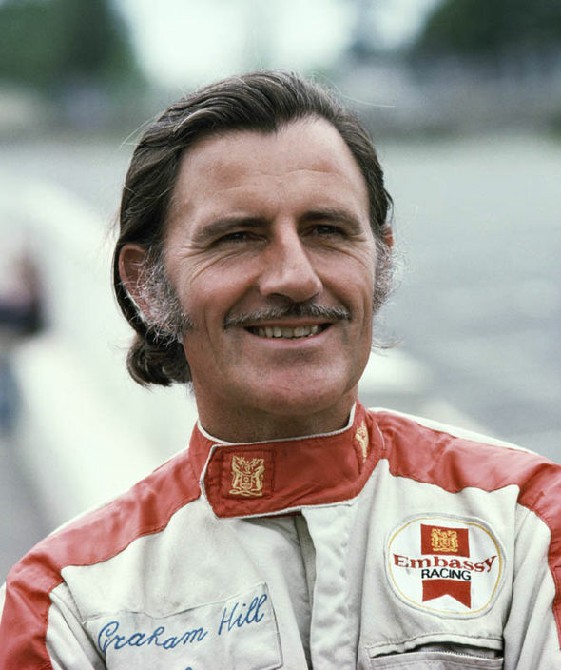 One of Britain’s greatest motor racing drivers has been killed in a plane crash in south-east England.
Graham Hill, 46, who retired from the sport in July 1975, was killed instantly along with the four other occupants in his Piper Aztec – all members of the Embassy Hill team.
Hill was piloting the plane when he clipped a row of trees on Arkley golf course in Hertfordshire, just before 2200 GMT.
The two-times world champion was flying Embassy Hill manager Ray Brimble, fellow driver Tony Brise, and two mechanics from France to attend a party in London.
Arley Golf Club steward Ted Dickins said visibility had been very poor at the time of the accident.
“It was terrible – the ambulances couldn’t even see the bunkers as they were driving down,” he said.
Friend and Elstree Aero Club chairman Spencer Flack said the champion driver was taking a risk by trying to land in bad conditions but told reporters he was an experienced flier.
“He was a skilful pilot who tried to get in and failed.
“In those conditions it’s just a matter of feet and seconds between life and death,” he said.
Government accident investigation officials are sifting through the wreckage to try to establish the cause of the crash.
Hill is the only driver to have won the Triple Crown of the Indianapolis 500, the 24 hours of Le Mans and the Formula One World Championship.
He won the world title with BRM in 1962 and again in 1968, with Lotus.
Hill retired from Formula 1 mid-season so he could concentrate on coaching Brise, a promising new driver in his own fledgling team Embassy Hill.

Three thousand people attended Graham Hill’s funeral in St Alban’s, Hertfordshire, on 5 December.
An inquest found he was flying only 60 ft (18.3m) above the ground when the plane hit the tree – but did not realise because of the poor visibility.
Verdicts of accidental death were returned for all six occupants of the plane.
Hill’s son, Damon, followed his father into Formula One racing and won the world championship in 1996.