This Day in History | 1978 Transatlantic balloonists in trouble 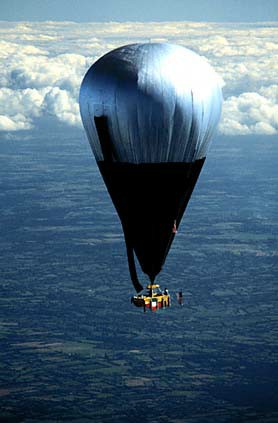 Two British balloonists battling to be the first to cross the Atlantic are in difficulties half way across the ocean.
Don Cameron, 39, and Major Christopher Davey, 34, were 1,000 miles west of the UK when they reported a helium gas leak in their bright yellow 90 ft (27.4m) tall balloon.
They say they are “limping along” and are not in immediate danger but the RAF control centre at Bracknell in Berkshire is on standby for a rescue.
A spokesman for the centre said: “they are in trouble but they are going on.”
RAF Nimrod aircraft have been following the pair on their transatlantic journey to provide assistance and weather reports.
The balloonists are maintaining a height of 7,000 feet (over 2,000m) and speed of 30 knots (55.5 km/h)
They took off yesterday from St John’s in Newfoundland in the 13th attempt in recent years to cross the Atlantic by balloon.
They hope to land safely in Cornwall or Brittany in France in the next couple of days.
The balloon and 14 ft (4.27m) gondola – designed to be a floating survival capsule – cost £150,000.
The first model of a hot-air balloon flew in 1782 and was made of paper-lined cloth by Joseph and Etienne Montgolfier in France.
A duck and a sheep were the first balloon passengers, but the first manned flight was made by Pilatre de Rozier in France in 1783.
But two Britons achieved the first non-stop trans-Atlantic flight in 1919 in a Vickers Vimy aircraft.
Pilot John Alcock and navigator Arthur Witton Brown claimed a £10,000 prize from the Daily Mail for their achievement.

Mr Cameron and Major Davey were within 350 miles of land and ready to touch down in Cornwall a day later.
But the next day a massive storm ripped an eight-foot-long (2.4m) gash in the balloon.
The balloonists jettisoned enough ballast to bring them within 110 miles of land – near Brest – before the balloon collapsed into the sea.
The men were picked up by a trawler and taken back to the UK.
Later in the year the first transatlantic balloon flight was made by Maxie Anderson, Ben Abruzzo and Larry Newman, from Maine in the US to Miserey in France.