This Day in History | 1979 – Election victory for Margaret Thatcher 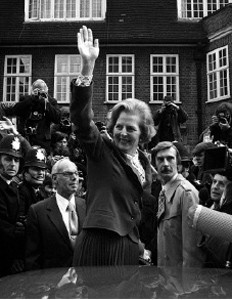 The Conservative Party has won the general election making Margaret Thatcher Britain’s first ever woman prime minister.
Mrs Thatcher arrived at Downing Street to take over from James Callaghan after her party won an overall majority of 43 seats.
On the steps of Number 10, she quoted from St Francis of Assisi: “Where there is discord, may we bring harmony. Where there is error, may we bring truth. Where there is doubt, may we bring faith. And where there is despair, may we bring hope.”
The Tories have won 339 seats, Labour 269, the Liberals 11, Ulster parties 12 and Nationalists four.
Former Liberal leader Jeremy Thorpe, currently awaiting trial at the Old Bailey for conspiracy and incitement to murder, has lost his North Devon seat in a crushing defeat.
Reacting to Mrs Thatcher’s victory he said: “I am horrified. She makes [her predecessor] Ted Heath look like a moderate.”
During the election campaign, Mrs Thatcher said the Conservatives would cut income tax, reduce public expenditure, make it easier for people to buy their own homes and curb the power of the unions.
She will soon announce members of her new cabinet. William Whitelaw is likely to become Home Secretary, Sir Geoffrey Howe Chancellor and Sir Keith Joseph Secretary of State for Industry.
Other prominent politicians rejected by the electorate included: Liberal deputy leader John Pardoe (Cornwall North); Shirley Williams (Hertford and Stevenage), formerly education secretary; shadow Scottish Secretary Sir Teddy Taylor (Glasgow Cathcart) and former arts minister Hugh Jenkins (Putney).
Labour can gain some consolation from its success in the local elections, winning several important councils from the Tories, namely Leicester, Coventry, Tameside and Sandwell.

Friend and foe agree that Lady Thatcher was one of the dominant political figures of the century. Over the following 11 years, she changed the nature not only of her own party but of others too.
Such policies as the sale of council houses and the privatisation of the nationalised industries have been accepted by most political parties.
Thanks in part to the relationships she developed with her ideological soul-mate US President Ronald Reagan and with the Soviet Union’s President Gorbachev, the “Iron Lady” as a Moscow newspaper once called her, became a world figure.
She was popular for her strong leadership style – demonstrated during the 1982 Falklands War.
Her strident Euro-scepticism led to disputes within her own party which resulted in her downfall in 1990 – and ultimately that of the Conservative Party, routed by Labour in the 1997 general election.