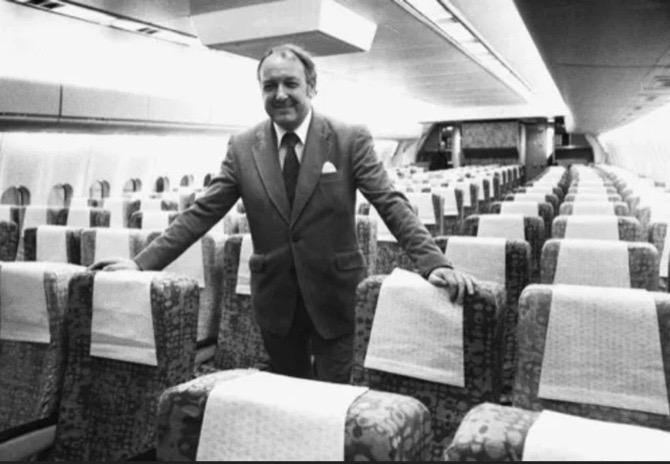 All 17 Laker aircraft have been ordered to return to the UK by tonight and the British Airports Authority has impounded a DC10 at Gatwick to cover the company’s landing and parking costs.

Stranded passengers – numbering 6,000 – will have the return half of their tickets honoured by British Airways, Pan American Airways, Air Florida and British Caledonian.

The receiver Bill Mackey, partner of Ernst and Whinney, told the media: “There is no way that Sir Freddie Laker can carry on with this business in its present form. It has to be sold.”

He said the Civil Aviation Authority had given six days’ notice for the withdrawal of the operating licence for the fleet of Laker aircraft.

The company’s 2,500 staff will continue to be paid until liquidators have finalised their decisions about redundancies.

Earlier in the week Sir Freddie was optimistic he had put together a £ 60 million rescue package for the company he established in 1966.

Talks with his creditors – and the close involvement of the Bank of England – have been underway since the autumn but they broke down when new figures showed ticket sales and bookings were lower than expected.

The government has also taken a keen interest in the fortunes of Laker – Mrs Thatcher is a personal admirer of Sir Freddie – but yesterday afternoon the Department of Trade confirmed once and for all there could be no state assistance.

Mr Mackey will meet Sir Freddie tomorrow and expects to have worked out the future of the airline by the end of the week.

Thousands of pounds poured into a “Save Laker”fund, set up by members of the public sympathetic to the flamboyant tycoon. But it was too little too late.

Within weeks Sir Freddie was attempting to re-launch an airliner by transferring the Laker Airways licences to a new company.

The Civil Aviation Authority officially blocked his efforts in May after objections from other airlines and the public.

Freddie Laker retired to Florida, then the Bahamas. He died in Miami aged 83 on 10 February 2006.