This Day in History | 1984 Europe grants emergency aid for Ethiopia 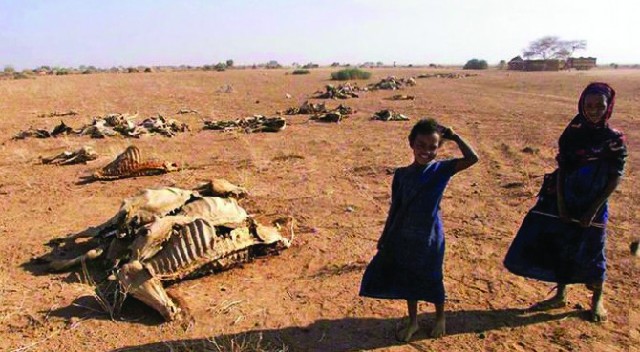 The EEC is donating £1.8 million to help combat the famine in Ethiopia.
Officials from Oxfam, Save the Children, Christian Aid and the Red Cross believe that up to 10 million people are facing starvation unless the flow of aid is increased.
Aid agencies lobbied EEC ministers in Brussels in response to the latest drought to hit the country.
Hugh McKay from the Save the Children Fund said: “This is an excellent start and will buy us a little time to develop a long term strategy to deal with this tragedy.”
The Community has also ordered the immediate shipment of 5,000 tons of food with more to be delivered soon.
The worst affected areas are the northern provinces of Tigre, Wollo and Eritrea, where a 10-year drought and a succession of wars have produced the worst famine in Ethiopia’s modern history.
As the announcement was made the Ethiopian Relief and Rehabilitation Commission said it would hold an emergency meeting with Western governments to discuss ways to improve airlifting food to the region.
Local officials are said to be trying to clear congestion at ports to get more food to the rest of the country. Up to 1,000 tons of food a day are now being handled, up from 500 a few weeks ago.
A recent report shown on the BBC highlighted the harrowing problems being faced in Ethiopia and led to an overwhelming public response.
Overseas director of Oxfam Michael Harris said: “On one day alone we received 1,000 calls from people offering help, including three who offered transport aircraft.”

One million people are thought to have died in the famine of 1984 despite money from around the world helping to improve the situation.
In December 1984 rock stars joined together to record “Do they know it’s Christmas?”. The single raised more than £12 million for famine victims in Africa.
Live Aid in July 1985, organised by Bob Geldof, raised more than £70 million for the cause. Two massive concerts were staged in London and Philadelphia. Artists including Paul McCartney, U2 and Madonna performed on the day.
Many Ethiopians continue to rely on food aid from abroad. In 2004 the government began a drive to move more than two million people away from the arid highlands of the east.
It said the programme was a lasting solution to food shortages.