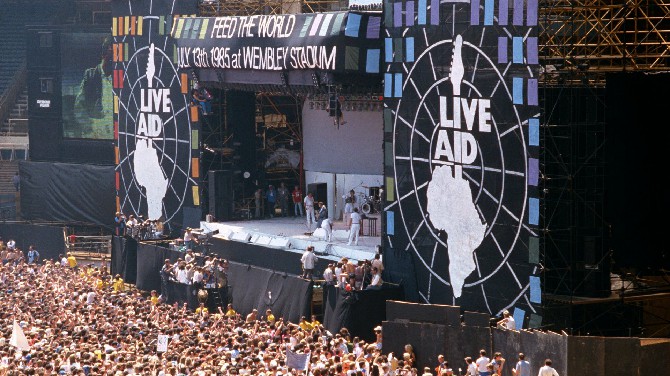 The Live Aid concert for the starving in Africa has raised triple the £10m expected.
And as the London event draws to a close at Wembley Stadium, Britain had contributed £1,100,000 to the global total of £30m.
Described as the Woodstock of the eighties, the world’s biggest rock festival was organised by Boomtown Rats singer Bob Geldof to raise money for famine relief in Africa.
Wembley was packed with a crowd of 72,000, andTV pictures, co-ordinated at BBC Television Centre, have been beamed to over 1.5 bn people in 160 countries in the biggest broadcast ever known.
The transatlantic concert began in London’s midday sunshine with a fanfare for Prince Charles and Princess Diana and Status Quo performing Rocking All over the World.
Stars were flown in by helicopter into the arena in a line-up that included David Bowie, Wham and royal favourites Dire Straits.
Frequent appeals by Bob Geldof reminded viewers of the motive for the occasion: “Don’t go to the pub tonight. Please stay in and give us your money. There are people dying now.”
He himself took the call from the ruling family in Dubai who made the biggest single donation of £1m.
Across the UK eight appeal centres were set up with 200 phone lines to handle – mainly credit card – donations of up to £2,000.
In the US 22,000 pledges were received within five minutes of the Beach Boys taking to the stage in the simultaneous concert at JFK Stadium, Philadelphia.
The 16-hour music marathon is being completed there tonight with acts including Bob Dylan, Duran Duran and Paul Simon.
Nine months after the droughts, disease and famine in north eastern Africa were brought to the media’s attention the UN has warned that 160m people are still affected.
Governments have begun a global relief operation but there are still problems of distribution in the worst hit areas – mainly Sudan and Ethiopia.

After seeing BBC news reports of the African famine Bob Geldof and Midge Ure from Ultravox wrote the song Do They Know It’s Christmas to raise money for the crisis. Mr Geldof went on a crusade to attract other stars to the cause.
Performing under the name Band Aid, they released the song on 7 December 1984. It was the fastest selling single ever and raised £8m.
Live Aid eventually raised £40m. Half of the money was spent on food and half on long-term development.
Bob Geldof was given an honorary knighthood in 1986.
On 2 July 2005 Bob Geldof organised Live 8 – a series of rock concerts around the world to raise awareness about global poverty and put pressure on the leaders of the G8 nations to tackle the problem.
Six days later the G8 summit at Gleneagles in Perthshire, Scotland, agreed a $50bn aid package for Africa.