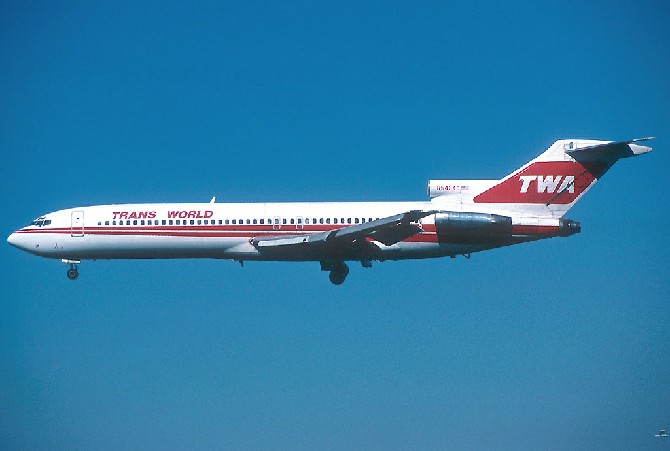 Four people, including an eight-month old baby, have been sucked out of a TWA passenger jet after an explosion ripped a hole in its side.
The Boeing 727 was flying at 11,000 feet (3,350 metres) over Greece, on its way to Athens, when the bomb went off.
It blew a hole six feet by three feet (2m x 1m) wide under a window in front of the starboard wing.
It is believed the explosion happened at floor level in the passenger compartment itself.
The four bodies of the victims were retrieved from a site 87 miles (140 km) southwest of Athens.
Three were from the same Greek-American family, believed to have been a grandmother, her daughter and her granddaughter.
Police also found the body of a male passenger identified as a Colombian-born American, sucked out of the plane with his seat.
The remaining 118 passengers and crew survived. The pilot, Captain Richard Petersen, made an emergency landing, telling Athens control tower that the pressurisation in the cabin was failing.
He is being hailed as a hero. “We are proud of him,” said a TWA source.
Just seven passengers were taken to hospital, and only three were kept in for treatment.
One was Ibrahim al-Nami, from Saudi Arabia, who said he had been sitting next to the man who was sucked out with his seat.
“We heard a big bang outside the window,” he said,” and then I saw the man next to me disappear and I felt myself being pulled out.”
He avoided sharing the same fate by clinging on to his wife’s seat.
Another passenger escaped because she left her seat only minutes earlier to go to the lavatory.
Florentia Haniotakis, a Greek-American from Ohio, praised the crew and said they had comforted passengers during the emergency landing.
The airliner, TWA flight 840, was on the same Rome-Cairo route as a similar TWA plane hijacked by Shia Muslim gunmen in June 1985 after leaving Athens for Rome.

It emerged that the bomb had been planted under seat number 10F, probably inside a lifejacket.
A group calling itself the Ezzedine Kassam Unit of the Arab Revolutionary Cells said it was responsible, and said it was acting in retaliation for US bombing raids against Libya the previous month.
Police initially identified a Lebanon-born Palestinian woman, Mai Elias Mansur, a suspected terrorist connected with the Abu Nidal extremist group, involved in an abortive attempt to bomb a Pan American airliner in 1983.
She had travelled in seat 10F on an earlier flight of the same Boeing 727.
Ms Mansur strenuously denied any involvement.
After two years of fruitless investigation, the US State Department said it considered she had carried out the bombing, operating on the orders of known Palestinian terrorist Colonel Hawari.
Nobody has ever been convicted of carrying out the bombing.
TWA filed for bankruptcy in 2001 and was taken over by American Airlines.