This day in history | 1986 Eastwood voted mayor by landslide 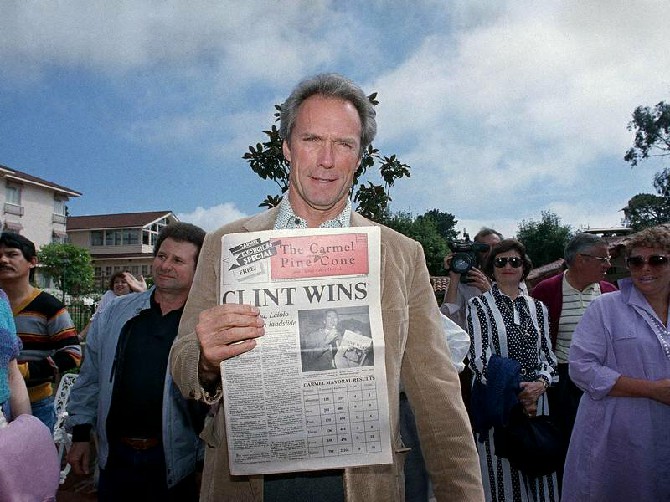 Residents of the Californian town of Carmel have overwhelmingly voted for actor Clint Eastwood as their mayor.
The turnout was double the norm in the picturesque seaside town, 80 miles (128 kilometres) south of San Francisco.
The 55-year-old Hollywood star got nearly three-quarters of the vote.
He polled 2,166 against the 799 votes cast for current mayor Charlotte Townsend, a former librarian.
Two of Clint Eastwood’s supporters were also elected on to Carmel’s local council, giving him control of the five-member body.
Mr Eastwood, a resident of Carmel for 14 years, decided to run for mayor after a series of clashes with the council.
After being refused planning permission to renovate his restaurant, the movie star took legal action and had the decision overturned.
His campaign centred on relaxing the strict controls on business in the town of 4,000 residents.
His famous Dirty Harry movie catchphrase “Make my day” was put to good use on bumper-stickers and T-shirts urging voters to back him.
The millionaire actor spent more than $40,000 on his campaign compared to the $3,000 spent by Mrs Townsend who has been the town’s mayor for four years.
After his victory, Clint Eastwood said his first priority would be to restructure some of the “punitive” by-laws in the town, such as those against fast-food restaurants and frisbee throwing.
But he said he was not aiming to emulate Ronald Reagan and make the transition from acting to US president.
Mr Eastwood said being mayor of Carmel was his highest priority.
“I’m taking a two year hiatus from films. This is one politician who doesn’t have ambitions to leave Carmel. This is where I belong,” he said.
Clint Eastwood takes over as mayor on Tuesday.
The monthly $200 (£133) salary is a big pay cut from the $6m per movie he usually commands.

In spite of a promise to devote himself full-time to Carmel, Clint Eastwood made two films while serving as the town’s mayor.
He decided not to run for a second term and stepped down in 1988.
Other US celebrities to enter public office since Ronald Reagan include former singer Sonny Bono who became a congressman in 1994 and movie star Arnold Schwarzenegger who was elected governor of California in 2003.