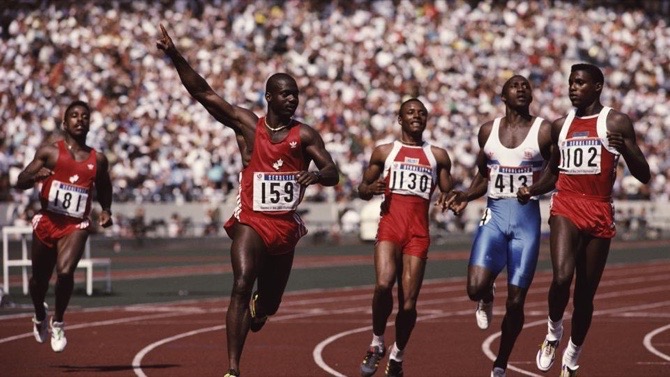 Ben Johnson has won the 100m gold at the Seoul Olympics and reaffirmed his position as the world’s fastest man.

The Canadian also smashed his own world record with a time of 9.79 seconds in the most exciting race of the Games so far.

Third place was claimed by Britain’s Linford Christie who became the first European to dip below 10 seconds.

Johnson led for the entire race, destroying the competition by hitting a maximum speed of 30 mph (48.3 km/h).

It took him just 48 strides to reach victory after an explosive start from the blocks – once again demonstrating his ability to react so fast to the starter’s gun he can almost secure a race in the first second.

The confident Canadian slowed slightly in the last few metres to look across his shoulder and raise a finger of triumph in the air.

And the sprinter told reporters at the post-race news conference he felt easily capable of running an even faster time.

But he told the BBC he valued the gold medal above the world record.

Ben Johnson tested positive for anabolic steroids after the race. The result was confirmed to the public two days later.

The International Olympics Committee stripped him of his gold medal and sent him home in disgrace.

He was banned from competing for two years and stripped of all the other world records and medals he held.

He began racing again in January 1991, but never regained his 1988 form and did not even make the 100m final at the 1992 Barcelona Olympics.

In January 1993 he tested positive again for steroids at an indoor meeting in Montreal, Canada and the International Association of Athletics Federations banned him from competition for life.