This Day in History | 1991 Superpowers to cut nuclear warheads 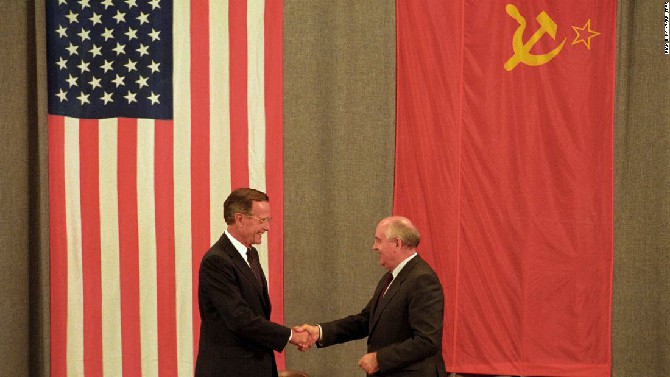 The United States and the Soviet Union have signed an historic agreement reducing their stockpiles of nuclear warheads by about a third.
The Strategic Arms Reduction Treaty, known as Start, was signed in Moscow by US President George Bush and Soviet leader Mikhail Gorbachev.
At a joint news conference after the signing ceremony, Mr Bush described the Start treaty as “a significant step forward in dispelling half a century of mistrust”.
Mr Gorbachev said it promised to be the start of “an irreversible process” of arms reduction, but stressed there was “still a lot to do”.
The agreement took more than nine years to negotiate, and reduces each side’s strategic nuclear weapons by about 35% over seven years.
The Soviet Union’s land-based intercontinental ballistic missiles will also be cut by 50%.
It is the first major agreement between the two countries over arms reduction since the Salt treaties, signed in 1972 and 1979, which limited the numbers of long-range nuclear missiles.
The Start treaty goes further, however, by committing the superpowers to scaling down their fleets of nuclear missiles and bombers, rather than just limiting expansion.
However, it still leaves the US and the Soviet Union with 9,000 and 7,000 warheads respectively. There was also no agreement over space weapons, or sea-launched cruise missiles.
Throughout the two-day summit, the emphasis has been on a new era of cooperation between the two sides.
Mr Bush and Mr Gorbachev spent much of their time discussing Mr Gorbachev’s attempts to reform the ailing Soviet economy and the help that might be offered by the West, although neither leader would be drawn on specific details.
They are also understood to have discussed a jointly-sponsored Middle East peace conference.
Mr Bush’s visit takes place at a time of increasing unrest in the Soviet republics.
Six months ago Moscow put down an uprising in Lithuania, and just yesterday six Lithuanian border guards were killed in suspicious circumstances.
Both Mr Bush and Mr Gorbachev said they regretted the incident, but refused to comment further.
In an indication of the delicate balance of power in the Soviet Union, Mr Bush has taken time during his visit to meet the President of the Russian Republic, Boris Yeltsin, for private talks.
However, he was quick to reassure journalists in Moscow he continues to support Mr Gorbachev and the Soviet government.

The Soviet Union collapsed in December 1991, before the Start treaty could be ratified.
After an intense period of diplomacy, agreements were reached with the Russian Federation and three former Soviet states where nuclear weapons were stationed – Ukraine, Belarus, and Kazakhstan.
The Start Treaty finally came into effect in December 1994, although the targets set out in the treaty were not met until 2001.
In 1993, the Start II treaty agreed to scrap a further 3,000-3,500 warheads. It was ratified by the US Congress in 1996.
In 1997, US President Bill Clinton and Russian President Boris Yeltsin extended the treaty’s deadline to 2007, and set out to begin negotiations on a Start III treaty for further reductions.
Eventually Start II and Start III were superseded by a further arms reduction treaty signed in 2002.
The Strategic Offensive Reductions Treaty, better known as the Treaty of Moscow, aims to cut the nuclear warheads of each side to between 1,700 and 2,200 by 2012 – a reduction of about two-thirds.