This day in history | 1991: UK forces withdraw from Kurdish haven 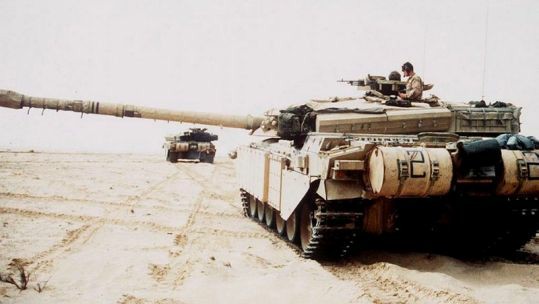 British troops protecting the Kurdish population in Iraq have begun to pull out of the region.
They had been part of a western relief effort – Operation Haven – to re-settle 450,000 Kurdish refugees who fled into the Turkish mountains when Iraqi President Saddam Hussein crushed their rebellion in March.
At its height the allied presence in northern Iraq – which began in May – numbered 20,000 men from 13 nations.
The decision for the remaining 3,300 soldiers to leave was announced in Washington two days ago.
Some Kurds have spoken of their fear of reprisals from Saddam Hussein as the allies withdraw and there have been peaceful demonstrations around the former headquarters.
All foreign troops – including American, French and Dutch – are on schedule to meet the withdrawal deadline of sunset tomorrow.
Local guerrilla leader Tawfiq Abu said: “It would be better for us if they stayed, so Europe would remember us. But they helped us at the right time. If they hadn’t come we would all be dead.”
A force of around 3,000 American, British and French – and possibly Italian and Turkish – troops will form a Rapid Reaction Force (RRF) in southern Turkey to preserve the Kurdish security zone 50 miles into north-western Iraq.
The allied command hopes this will provide enough support for the Kurdish leadership to reach agreement with Baghdad.
The Pentagon has warned Saddam Hussein no Iraqi aircraft are to fly over the Kurdish settlements north of the 36th parallel air exclusion zone and US planes will continue to fly over the region.
Most British soldiers will return to the UK but 400 will join the RRF in Operation Poised Hammer based at Silopi, Batman along the Turkish border and at Incirlik in south-eastern Turkey’s Adana Province.

Between 1975 and 1990 4,200 Kurdish villages in Iraq were demolished and countless Kurdish people were killed in mass executions by the regime. Saddam Hussein took over as Iraqi leader in 1979.
In October 1991 Kurdistan began a fragile self-rule for its population of 3.5m in three provinces of northern Iraq, with a no-fly zone assured by the Western allies.
Saddam Hussein responded in November with crippling sanctions against the Kurdish areas.
The Kurds held democratic elections in May 1992 and the two leading parties – the PUK, under Jalal Talabani and the DPK under Masoud Barzani – formed a coalition government in July of that year.
But fierce fighting between the two main factions in the mid-1990s led to the effective partition of the Kurdish region.
In May 2006 the Kurdish parliament approved a single administration, uniting the two rival parties.