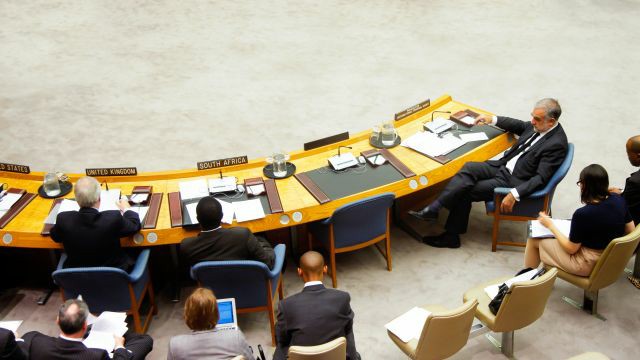 The United Nations has ordered Libya to surrender intelligence agents accused of the Lockerbie and French airliner bombings.
The 15-nation Security Council unanimously adopted a resolution urging Libya ‘’immediately to provide a full and effective response’’ to the British and American demand that the two men – Lamen Khalifa Fhimah and Abdel Basset Ali al-Megrahi – be surrendered to stand trial.
The resolution also ordered Libya to co-operate with France’s investigation into the bombing of a French-owned UTA airliner over Nigeria in 1989, in which 171 people lost their lives.
Western diplomats said that they would seek selective UN sanctions against Libya ‘’in a matter of weeks’’ if the two Lockerbie suspects are not handed over.
The pair are accused of conspiring to place a bomb concealed in a radio cassette recorder in a suitcase on board an Air Malta flight that connected to Pan Am 103 in Frankfurt.
The bomb exploded over Lockerbie on 21 December, 1988, killing all 259 people on board and 11 on the ground.
Police in Scotland and the US originally suspected the Syrian-based Popular Front for the Liberation of Palestine – General Command (PFLP-GC) of having a role in the bombing.
But further evidence led the authorities to conclude that Libya ordered and carried out the attack in retaliation for the downing of an Iranian airliner by a US missile in 1988.
The resolution marks the first occasion the Security Council has told a country to extradite any of its citizens.
It is also the first time the UN has implicitly accused a fellow member state of being involved in state terrorism.
Despite the move, families of the victims of the Lockerbie bombing criticised the United Nations resolution for being weak and inadequate.
“There is ample evidence that both Syria and Iran were involved,” said Daniel Cohen whose 20-year-old daughter, Theodora, died in the crash.
“But, because of political reasons the United States and Great Britain have drawn the Pan Am 103 case very narrowly, accusing only two Libyans.”
A senior Libyan official said that Tripoli had no intention of extraditing the men.
Jadualah Azuz Talhi, a former foreign minister who led a Libyan delegation, told the security council that the suspects were innocent until proven guilty.

Shortly after the resolution Libya agreed to hand over the two men accused of the Lockerbie bombing providing they were tried in a neutral country.
But Britain rejected their terms and the UN eventuallly imposed sanctions to try to force Libya to hand over the suspects.
It took another nine years of legal wrangling before Colonel Gaddafi finally handed Abdel Basset Ali al-Megrahi and Lamen Khalifa Fhimah over on the basis that they would be tried in a neutral court under Scottish law.
Abdel Basset Ali al-Megrahi was jailed for life when the trial went ahead at Camp Zeist in Holland.
But his alleged accomplice was freed after he was found not guilty.
Relatives of the 170 victims who died in the French airliner bombing eventually agreed to a $170m (£88m) pay out offered by Libya in January 2004.
Despite the move, Tripoli has never accepted responsibility for the bombing – even though six Libyan officials were tried and convicted in absentia by a French court in 1999.
Libya refused to extradite the six – who include Colonel Gaddafi’s brother-in-law – and has always maintained their innocence.