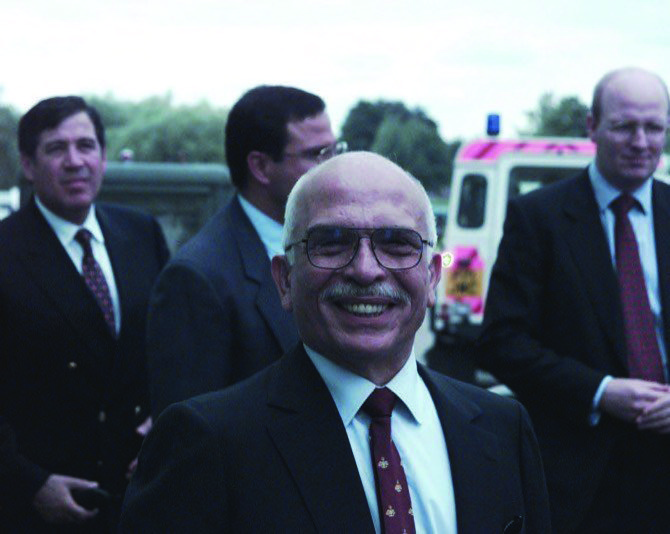 King Hussein of Jordan has made his first public visit to Israel’s largest city, Tel Aviv, in the latest indication of the new warmth between the two countries.

The King, an experienced pilot, flew a Jordanian army helicopter to the Sde Dov air base near Tel Aviv, where he was met by Israeli Prime Minister Shimon Peres.

At a ceremony to honour the chief negotiators who brokered the 1994 Israeli-Jordanian peace talks, Mr Peres said: “We still face all kinds of challenges: the greatest of them is not to let the galloping prospect of peace pass us by.”

“I would like to say how happy we are to have the opportunity to be with our friends, our partners in building and laying the foundations for a comprehensive peace in this region,” replied the King.

Israel and Jordan ended 46 years of war with a peace treaty in 1994 backed by US President Bill Clinton. The deal drew condemnation from Jordanian Palestinians, who make up 60% of the population.

PLO officials were critical of today’s visit by the King, saying he should first have visited lands under Palestinian rule.

There was extremely tight security as King Hussein’s motorcade made its way through Tel Aviv.

A quarter of Israeli police – 6,000 officers – were deployed to protect him, and central Tel Aviv was paralysed as police closed off roads and diverted traffic.

Thousands of Israelis turned out to watch him go by, giving him an enthusiastic welcome with Jordanian flags and banners greeting the King in Arabic.

King Hussein did hold talks with Mr Peres, but diplomats stressed the main purpose of the visit was symbolic rather than political.

Later, he flew to Beit Gavriel on the shore of the Sea of Galilee for talks with Mr Peres and US Secretary of State Warren Christopher, whose shuttle diplomacy in the region continues tomorrow with a visit to the Syrian capital, Damascus.

Jordan has been largely diplomatically isolated since taking a neutral stand in the Gulf War of 1991.

However, the peace agreement with Israel and King Hussein’s increasing opposition to the Iraqi leader, Saddam Hussein, have brought the country back into the international fold.

Shimon Peres lost the 1996 Israeli elections to Binyamin Netanyahu, who campaigned against the Rabin-Peres peace programme.

The Israel-Jordan peace treaty of 1994 continues to hold fast, however, despite its continuing unpopularity with many in the region.

In September 2002, Jordan and Israel agreed on a plan to pipe water from the Red Sea to the shrinking Dead Sea that straddles the two countries.

The project, costing $800m, was the two nations’ biggest joint venture to date.

And 18 months later, in March 2004, the two nations agreed a joint project to build a desert science centre on their shared border.

King Hussein of Jordan died of cancer in 1999.