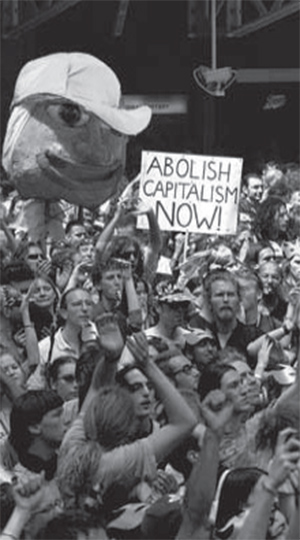 Police and protesters have clashed at a demonstration against capitalism in the center of London’s financial district. The rally was timed to coincide with the start of a summit of the world’s richest countries in Germany.
More than 4,000 people took to the streets of London in protest at the burden of debt owed by the world’s poorest countries to the Group of Eight nations. They were joined by about 300 cyclists, who disrupted traffic by riding slowly into the city centre, carrying banners.
But what began as a peaceful gathering became violent after a small crowd of demonstrators began attacking buildings and smashing windows. Some protesters vented their anger on the Liffe Building, which forms part of the London Stock Exchange.
One group managed to break into the building but a safety shield was activated, preventing them from reaching the trading floor. Police said they were attacked with stones and bottles. One woman was taken to hospital with suspected concussion and a broken leg after she was hit by a police van.
At least 42 protesters and four police officers have been injured. A number of arrests have been made and the violence is now said to be largely under control. A massive clear-up operation will shortly be underway, as well as an investigation into the violence.
The London rally had been timed to coincide with other protests around the world. German police were expecting up to 100,000 demonstrators to protest in Cologne, where the summit was being held, and call for the debt of the world’s poorest countries to be cancelled.

On the day 16 people were arrested for offences including criminal damage and assault.
One website sympathetic to the activists’ aims described the event as a protest against “an economy that puts money, growth and the ‘free market’ above everything else, leading to poverty, the Third World Debt and environmental destruction.”
In the House of Commons Home Secretary Jack Straw condemned the “deplorable outbreak of public disorder and violence.” Billed as a Carnival Against Capitalism, the City of London protest marked the first in a series of major anti-capitalist demonstrations in central London.