This Day in History | 1999 UN force arrives in East Timor 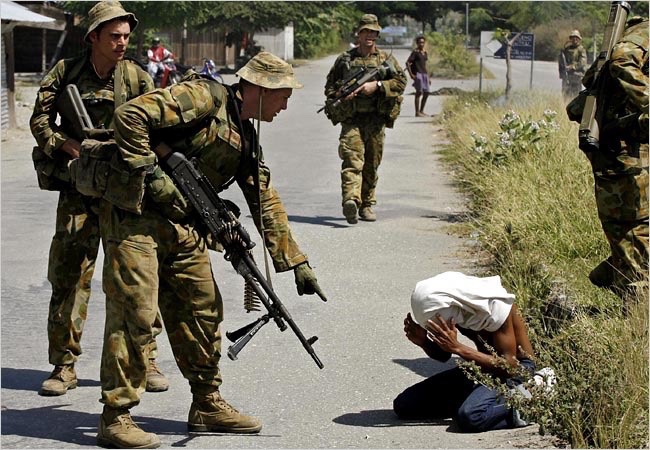 A multinational peacekeeping force has landed in East Timor in an attempt to restore law and order to the territory.

The UN force has been sent to the island to end the violence that has beset the region since its people voted overwhelmingly for independence from Indonesia.

Pro-Jakarta militias are thought to have killed thousands of people since the election on 4 September.

They have been apparently backed by the Indonesian military (TNI), but members of the UN International Force for East Timor (Interfet) said the army was now cooperating fully with the peacekeepers.

The operation began at 0640 local time (0140 BST) when a transport plane carrying British Royal Marines and Australian troops touched down at Komoro airport in the capital, Dili.

Throughout the day a total of 1,190 soldiers – mostly from Australia and New Zealand – landed on the war-torn island.

Fires from recent attacks were still burning, but the troops met little resistance from Indonesian forces or the armed bands that have been terrorising the population.

“The TNI have been quite helpful – we have not seen any militia,” said British Brigadier Mark Evans.

Another 1,110 peacekeepers will arrive in East Timor tomorrow and within the next seven days the international force will eventually grow to 8,000 soldiers – drawn from more than 20 countries.

UK Armed Forces Minister John Spellar told the BBC the primary objective of Interfet was to take the militias off the streets.

The next stage would be to re-establish supply lines of food, water and electricity in a capital mostly abandoned by its inhabitants.

Indonesia invaded East Timor in 1975 when Portugal withdrew after occupying the island for 450 years.

78.5% of the country voted for independence in the September 1999 elections.

In August 2001 an 88-member Constituent Assembly was elected.

The former rebel leader Xanana Gusmao was voted East Timor’s first president on 14 April 2002, and on 20 May 2002 the country became fully independent.