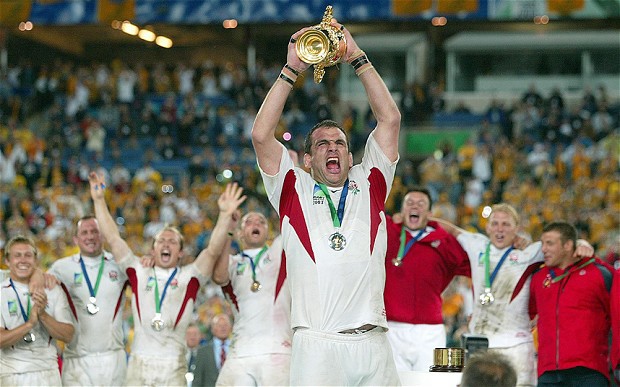 England have won the Rugby World Cup, beating Australia 20-17 in a game which is already entering the history books as one of the country’s great moments of sporting triumph.
The final, in Sydney, was won just 26 seconds from the end of the match, with a breathtaking drop goal by Newcastle fly-half and youngest member of the squad, Jonny Wilkinson.
It is the first time a northern hemisphere side has won the world title.
Australia battled hard and were never out of the game, but after 100 minutes of rugby and a dramatic extra-time finale the England team wrestled away the cup by the slimmest of margins.
England showed no signs of the weakness they were criticised for when kicked out by South Africa in the last World Cup.
After Australian winger Lote Tuqiri opened the scoring with just six minutes on the clock, three Wilkinson penalties quickly turned the tables. England were 14-5 ahead.
The game was often nailbitingly close as Australia levelled twice more – once at 80 minutes with a last-gasp penalty from Elton Flatley, and again at 97 minutes when the two sides were 17-17, again down to Flatley’s efforts, pushing the game into extra time.
Three minutes later, and with a sudden death shoot-out just seconds away, it was all over as Jonny Wilkinson’s drop goal brought England the World Cup.
Even Wilkinson dropped his normal cool poise, leaping into the arms of fellow player Mike Catt.
Soon afterwards, at 2244 local time (1144 GMT), the England captain, Martin Johnson, stepped forward to receive rugby’s greatest prize.
The biggest cheer, unsurprisingly, was saved for Wilkinson, who by that stage could not stop smiling.
The 24-year-old is already being hailed as rugby’s first superstar. He is England’s all-time record points scorer and has just been voted international player of the year for the second year running.
“He is a very special player, a very special person,” said Johnson.
He also spoke of his joy at lifting the Webb Ellis trophy, the first captain of his country to do so.
“It hasn’t sunk in,” he said. “It will take a few days to sink in – it is fantastic for all the players, the management and the whole of England.”

The England rugby team returned home three days later.
Despite arriving at Heathrow in the early hours of the morning, thousands of fans turned out to give them a rapturous welcome.
On 8 December there was an unprecedented national day of celebration, with the team greeting hundreds of thousands of fans from open top buses in a victory parade through London.
They were given a champagne reception at 10 Downing Street and went on to meet the Queen at Buckingham Palace.
Police estimated that 750,000 supporters made the trip to central London, making the day the largest sporting celebration of its kind in the United Kingdom.
In the New Year’s honours list for 2004, coach Clive Woodward was given a knighthood, team captain Martin Johnson was awarded a CBE, and most of the squad – including Jonny Wilkinson – were awarded MBEs.
Wilkinson also won the Sports Personality of the Year Award for 2003 and an OBE in 2004.
In September 2004 Clive Woodward announced he would be stepping down as the England rugby coach after the Lions tour to New Zealand in 2005.
Since the World Cup victory, Jonny Wilkinson’s playing career has been blighted by injury.
The next rugby World Cup is scheduled for France in 2007.