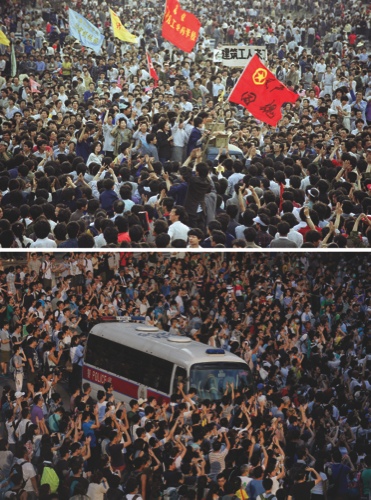 In this combination of file photos, a truck is almost buried in people gathered for a pro-democracy rally in Tiananmen Square in Beijing on May 17, 1989, top, and a police car is blocked by thousands of pro-democracy protesters outside the government headquarters in Hong Kong

The legacy of the 1989 crackdown in Tiananmen Square looms larger in Hong Kong than in mainland China, where the Communist Party has virtually erased all public mention of it. In this former British colony, hundreds of thousands attend candlelight vigils each anniversary to commemorate the grim end to the Beijing movement that was vanquished before many of the pro-democracy protesters in Hong Kong’s streets were even born.
Hong Kong’s student-led protesters insist they are not challenging communist rule, just details of Beijing’s plans for political reforms in the city. But many of their elders fear the protesters risk going too far if they stay in the streets in defiance of demands to leave in the biggest challenge to China since it took control of Hong Kong in 1997.
One urging the Hong Kong protesters to bide their time is reform-minded Bao Tong, former aide to then-Communist Party general secretary Zhao Ziyang, who spent the last 16 years of his life under house arrest after sympathizing with the students who occupied Beijing’s Tiananmen Square to seek democracy on the mainland.
“The seeds have already been sown, and they need time to lie fallow,” Bao wrote in a commentary Sunday for Radio Free Asia. “Take a break, for the sake of future room to grow. For tomorrow,” wrote Bao, who has been under house arrest himself after spending seven years in prison.
The memories of the June 4, 1989, military assault that ended the sit-ins in Tiananmen, killing hundreds, are vivid among Hong Kong people old enough to have lived through the exhilaration of the protests and the gloom that followed the crackdown. Many of Hong Kong’s 7.2 million people moved to the city to escape poverty, political pogroms and repression of dissent in the mainland, and they value the city’s democratic, Western-style civil liberties.
Benny Li, 46, was a university student in Shanghai at the time of the Tiananmen protests and has been living in Hong Kong for several years.
“I participated in the 1989 protests because I wanted the same things that Hong Kong people want now. All my friends in my generation, and those younger than us probably, morally support Hong Kong protesters. We agree with and understand what they are doing,” Li said.
The protesters are exercising civil liberties nonexistent in the Chinese mainland, where the government bans public dissent, censors the media and harshly punishes those deemed to be challenging the Communist Party’s monopoly on power.
The protests in Hong Kong, like those in Tiananmen, are a legacy of student and intellectual dissent stretching to the anti-colonial May Fourth movement of 1919.
Jeffrey Huang, 22, was sitting with other protesters in Hong Kong’s Admiralty area, where traffic was blockaded for an encampment festooned with canopies, banners and posters. He said he learned about Tiananmen during secondary school when teachers talked about it at an assembly marking the June 4 anniversary.
“For us, we believe that democracy will help us improve our lives in general and we think that not having democracy is the cause of many problems in Hong Kong, for example the high property prices,” said Huang, who recently graduated from law studies.
“The government pays much attention to the property developers because they maybe have the power to elect the chief executive,” he said, “and people think if there is more democracy the chief executive and the government will be more accountable to the citizens … instead of to the privileged class only.”
The most potent legacy of Tiananmen in Hong Kong, some say, is the passion driving so many of its residents to spend days and nights in the street, risking entanglements with the police and protest opponents, for the sake of attaining the “universal suffrage” they were promised when Beijing claimed control 17 years ago.
“I’m worried about police clearing the site but I’m not scared. Because I won’t yield to police violence. After they clear the site, I will come back,” said Larry Lai, a 20-year-old college student.
The point, they say, is to ensure their voices are heard.
Jackie Ng, 43, was a first-year university student in the Chinese mainland at the time of the Tiananmen protests. She brought her husband and young son to the protests in Admiralty.
“I was so moved to see this happening in Hong Kong. It reminds me a lot of what happened in 1989,” she said. Elaine Kurtenbach and Louise Watt, Hong Kong, AP