Time management ‘is a question of choice and mindset’ 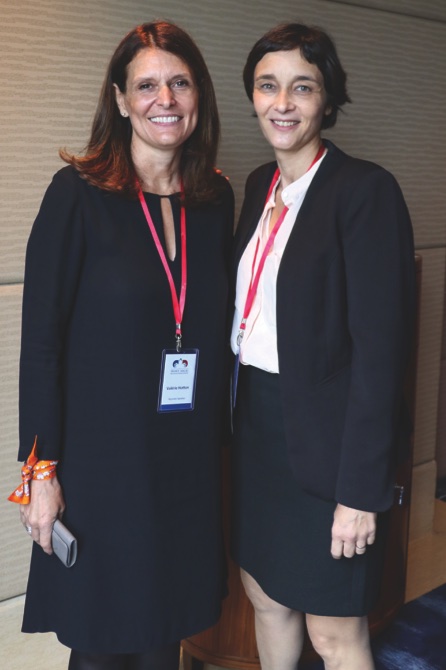 The real challenge of time management resides in ourselves as “time management is a [matter] of choice,” said Valérie Hotton, co-founder of Care Consulting company and guest speaker at the France Macau Business Association (FMBA) breakfast meeting event yesterday. Complementing this idea was her partner Frédérique Blanchard who said, “at the end of the day, it is a question of mindset.”

These were two of the speeches’ main points, delivered by the two specialists in coaching and training. Hotton and Blanchard were invited by FMBA to talk on the issue of time management and how to approach daily issues that impede this in both work and private life.

“Time is a very unique [factor]. Different people address time in a very different manner. Some will say they ‘never have time for anything’ others that ‘there is plenty of time’ for everything.” This idea was voiced by Blanchard at the beginning of the event, to the interest of its attendees around the breakfast table at Sofitel Macau at Ponte 16.

Hotton added that this idea comes down to the need to “allocate the right time to the right thing,” setting the necessary priorities for your own daily life. Otherwise, “the environment surrounding you will decide for you,” she cautioned.

In Hotton’s opinion, the choice of time allocation is a very emotional process that has to do to with how “guilty” you feel about the time you spend at work, with family, or for yourself. Blanchard said this principle is exemplified by the “filling the jar” analogy – namely, about how “full” life can seem, and which priorities should be the “first pebbles to go inside.”

The talk also addressed ways of minimizing time wasters. “In the end it’s all about creating the right mindset, setting priorities, planning ahead and improving communication,” said Hotton. He remarked that people often perceive the same event in different ways and that such “misinterpretation” and “lack of communication” often leads to discomfort and unhappiness, especially at the workplace.

When questioned by the Times about meeting times and day planning, both specialists agreed that more important than setting strict rules and tight schedules is to “make good use of the time.”

“When you know that you have a meeting and you know that you will be on time and maybe have 20 minutes before, you should think about what can you do during this time and use the time and plan [accordingly],” said Blanchard. Adding to this, Hotton remarked, “because you planned and you have a clear mind, because you know you are on time, your mind will be available to do something efficient.”

In response to a question on the need for people to disconnect from work during their free time or holidays, especially in relation to the growing trend in Macau society for employees to “be always available,” Blanchard said, “in fact I think there is a counter-trend to that in a way because we are reaching a kind of a limit for that and people are more aware now that being ‘too efficient’ leads to ‘burnout’,” adding, “there is a counter-trend to that [old mentality] of the crazy pace and rushing everything. There are companies now that ask their workers to leave their working phones in the office or [setting rules that] disallow them from replying to emails when they are on holidays because they realized they had too many ‘burnouts’.”

“I guess [whoever is setting these rules] needs to be retrained and they will become aware quickly that this practice doesn’t go in a good direction,” Blanchard concluded.

Hotton expressed the belief that the issue also has to do with technology and the way we work nowadays, as compared with the past. “We don’t need to have a desk, we can work at home or in transit so it is difficult to erect a barrier between work and leisure. But again it goes back to your mindset and state of mind. It is important to be the pilot of your time and explain to others that it’s important to have a separation,” she noted. “What is difficult [to manage] is when the rules are not clear and every time you feel very depressed because you have lots of pressure.” She concluded by saying, “this needs to be addressed and explained [to the bosses who overload workers] that in order to be efficient, people need to have a proper rest and ‘time to breathe’.”

In a talk with the Times, both specialists agreed that time management should be taught from young age “as we know that even students nowadays have a lot of pressure and duties,” Hotton noted.

“Everybody should learn how to set their priorities no matter what age. It is never too late to learn this,” concluded Blanchard.