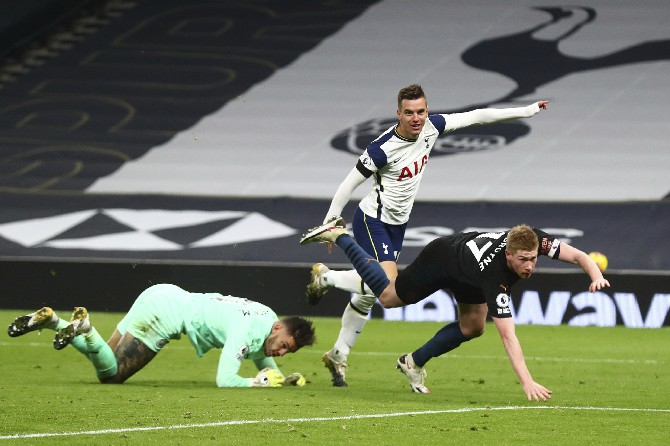 Tottenham beat Manchester City 2-0 yesterday [Macau time] to go top of the English Premier League with a trademark, defense-first performance from Jose Mourinho against his old rival Pep Guardiola.
Mourinho marked a year since he replaced Mauricio Pochettino as Tottenham manager with a win built on compact defending and smartly timed counter-attacks, as Guardiola tasted defeat in his first game since signing a two-year contract extension at City.
“We know how good Pep’s teams are and how good the players are,” Mourinho told Sky Sports. “We found a way to play and it was magnificent to see them play how they did.”
Tottenham took the lead in the fifth minute when both of City’s center-backs followed Harry Kane. That opened up plenty of space for Son Heung-min to pick up a lobbed pass from Tanguy Ndombele and score. Kane put the ball in the net soon after but was offside.
City had an overwhelming share of possession but accomplished little with it except for a disallowed goal for Aymeric Laporte after Gabriel Jesus controlled the ball with his arm in the buildup.
Giovani Lo Celso stretched Tottenham’s lead less than 30 seconds after coming off the bench when Kane played him in to score on a 65th-minute counter-attack. Goalkeeper Hugo Lloris reacted quickly to keep out Ruben Dias’ header late on.
Third-place Leicester can move above Tottenham if it beats fourth-place Liverpool today.
Man City is eight points off Tottenham.
“We are far away from where we want to be, we have to start to win. We want to be there until the end,” Guardiola told Sky Sports. “This is a weird season, for many reasons, and we have to start to lift the players.”
Mourinho said Tottenham could be without defender Toby Alderweireld for a while after he was substituted in the 81st minute with what the Portuguese coach called an “important injury.”
Both clubs paid tribute to former England goalkeeper Ray Clemence before kickoff with a minute’s applause. Tottenham’s players wore black armbands for their former goalkeeper, who won trophies with both Tottenham and Liverpool. Clemence’s death was announced last weekend at age 72. AP