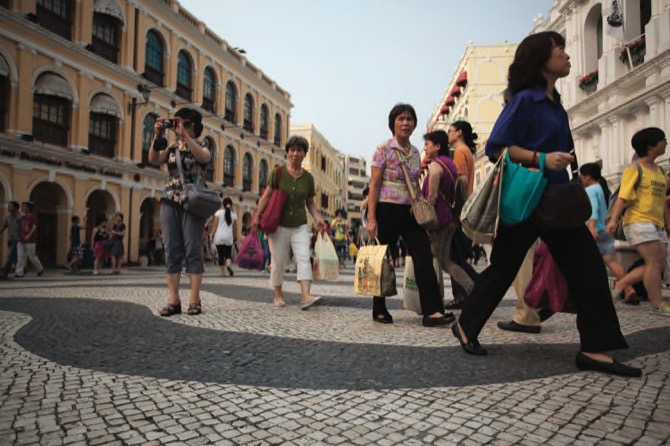 Mainland visitors to Macau will not be permitted to re-enter the SAR from Guangdong Province within a 60-day period dating from their last departure under the new exit-entry measures that came into effect yesterday, the Times has learned.

Announced by China’s National Immigration Administration (NIA) last week, the new measure allows most mainland residents, regardless of where they were born or where they live, to apply for travel passes to Hong Kong, Macau and Taiwan at any immigration administration center across the country. Residents of neighboring Guangdong province are excluded from the policy and can only apply for the travel permit once every two months.

The new measure is a departure from previous restrictions that required visitors to obtain travel permits at their Hukou-registered residences. In 2018, the restrictions were relaxed and extended beyond the city of registration to the entire home province.

However, the Times learned yesterday that restrictions similar to those announced for Guangdong residents will, in fact, be applied to other mainland visitors, if they only intend to cross into Guangdong and back.

Under the NIA announcement, mainland residents who are not from Guangdong are said to be able to use self-service kiosks at municipal authorities to receive an immediate travel permit. Users were instructed to insert their travel card, select the type of travel permit, whether it applies for Macau, Hong Kong or both SARs, and then pay with a bank card.

According to information provided to the Times, one mainland resident exited Macau yesterday to be issued a new travel permit for re-entry from a police station in neighboring Zhuhai. Although the Chinese citizen is not a resident of Guangdong province, the self-service kiosk would not issue the permit, saying only that it had “failed to read the permanent residence.”

Several other mainland residents who were trying to obtain their own re-entry travel permits experienced the same difficulties, even though their Hukous are registered to other places, such as Guangxi province and Shanghai municipality.

Around 70 people were waiting around in the area, reporting the same problem.

A police officer instructed the people in the Department that visitors must wait 60 days from their previous Macau or Hong Kong exit before being able to successfully apply for a new travel permit.

“It goes with the policy written on your travel card,” a visibly “exhausted” police officer kept telling the travel permit applicants, according to the information provided to the Times.

These visitors would not need to wait 60 days if they returned to their Hukou-registered provinces, where a travel permit could be arranged on the day. Alternatively, some Taobao services can arrange for a permit can be sent from a Hukou-registered address to another address on the mainland, usually within three days.

The same source said that they contacted the Zhuhai Department twice before yesterday to enquire about the new measure, but the authority said that they had no information to provide. Meanwhile, a Shenzhen immigration department in Bao’an district confirmed that renewal of the permits was possible as outlined in the NIA announcement.

Neither authority mentioned anything about a 60-day cooldown period between new travel permits.

The measure was introduced to offer Chinese residents more convenient and more efficient processing of the necessary documents for travel within the greater China region. Data provided by the NIA shows an estimated 21 million people will apply for passports and travel permits this year in different places rather than returning to their home cities. DB