Tourist arrivals could reach 40m by 2025

A public consultation on the “Tourism Industry Development Master Plan” will be held between May 23 and July 22.
Helena de Senna Fernandes, director of the Macau Government Tourism Office (MGTO), said yesterday that the number of tourists is expected to grow by one to two percent year-on-year.
According to Senna Fernandes, the main focus of the plan is to “establish Macau as a world centre for tourism and leisure” in the next 15 years.
Amongst other goals, the plan aims to promote environmentally friendly hotels, as well as encourage the hotel industry to establish eco-friendly practices.
According to the consultation material issued by the MGTO, mainland tourists represented 66.5 percent of the total number of tourists in 2015, followed by visitors from Hong Kong. International markets accounted for nine percent of local tourism revenue. This number represents a consistent decline over the past few years. By 2025, in the words of Senna Fernandes, “the number of international tourists may account for 14 to 15 percent.” 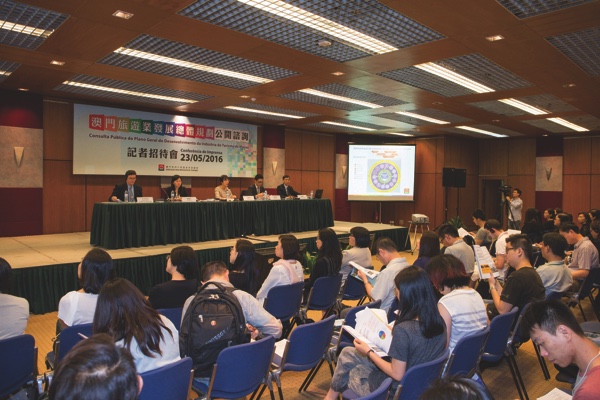 In 2015, the city welcomed a total of 30,714,628 tourists, a number which is expected to reach at least 33 to 35 million in 2025. Other estimates based on a 3 to 5 percent annual visitor growth, put the figure at as high as 40 million.
However, based on a recent report by the Macau Polytechnic Institute, last year’s tourist arrivals already exceed the region’s overall carrying capacity. In response, Senna Fernandes claimed that Macau’s carrying capacity should be expanded in the future. Furthermore, she commented that the gaming industry has been encouraged to offer “more tourist products,” and hopes that current the non-gaming offerings will be doubled in the coming years.
The plan also intends to increase the number of international airlines flying to Macau. Senna Fernandes acknowledged that “over 90 percent of the passengers arriving at the Macau airport are from the mainland.” She claimed that regional airports, will help to draw more international tourists to Macau.
In addition, the Hong Kong-Zhuhai-Macau Bridge development project will reduce the distance between the regions.
Earlier this year, Senna Fernandes listed four major goals for tourism policy this year: to “promote smart tourism by maximizing our use of the internet and social media platforms for tourism promotion; deepen the planning of tourism development; develop electronic administration and enhance tourism service quality; and strengthen regional cooperation, actively participating in international organizations.”
The consultation will span two months, during which the MGTO will arrange several public discussion sessions.  Staff reporter

The master plan includes some concrete construction projects, like the development of the Lai Chi Vun village dockyard in Coloane as a tourist spot for an art exhibition center dedicated to traditional shipping handcraft. Other measures include the renovation of the Grand Prix Museum, hosting of the International Film Festival, creation of the Gourmet Capital, and introduction of top-class theme parks.