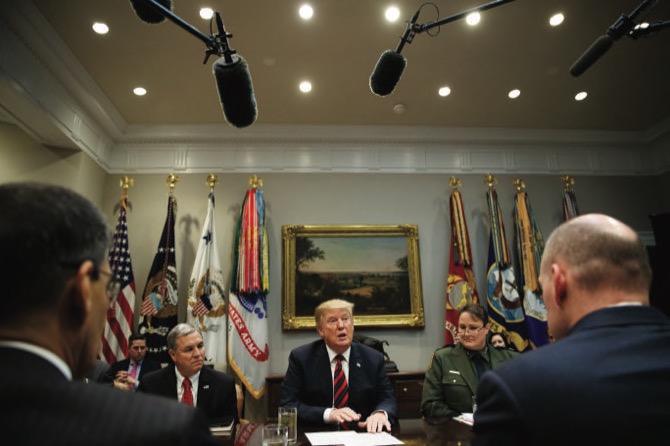 President Donald Trump on yesterday [local time] dangled the prospect of walking away from a new trade deal with China if it’s not to his liking, just as he cut short his summit with North Korea’s Kim Jong Un when the two sides failed to reach an agreement.

Trump spoke on the state of negotiations with China shortly before meeting with Republican senators on trade issues. He spoke optimistically of the U.S. and China being able to reach an agreement, declaring that “China has not been doing well. We’ve been doing unbelievably well.”

But Trump also seemed to hark back to last month’s summit when asked whether he preferred that the two parties work out a trade deal before he meets with Chinese President Xi Jinping or whether he’d prefer to work out the final details with Xi. Trump said he preferred the latter option.

He cautioned that “President Xi saw that I’m somebody who believes in walking when a deal is not done.”

Last month, Trump had said “sometimes you have to walk” in explaining why his summit with Kim was abruptly cut short without a commitment from North Korea to eliminate its nuclear arsenal.

“We’re making great deals, or we’re not going to make them at all. We’re going to go [with] tariffs,” Trump said,

So far, the U.S. has imposed tariffs on USD250 billion of Chinese imports. China retaliated by slapping duties on about $110 billion of U.S. goods. Many of the tariffs imposed by China target U.S. farm products such as soybeans and pork, contributing to a projected 12 percent drop in net farm income last year.

Farmers are anxious for the president to work out an agreement with China as well as for Congress to ratify a new trade agreement with Canada and Mexico to replace the North American Free Trade Agreement.

“It’s an exciting time in terms of trade,” Trump said.

Sen. Chuck Grassley, R-Iowa, the chairman of the Senate Finance Committee, said after the White House meeting with Trump that he urged the president and lawmakers “to solve this tariff issue on steel and aluminum.”

Trump imposed tariffs on imported steel and aluminum in the name of national security, but those tariffs have led to a series of retaliatory tariffs from Canada and Mexico targeting farm country. Grassley said no agreements or conclusions were reached in the meeting.

While Trump portrayed China as anxious for a trade deal, his former economic adviser, Gary Cohn, said he believes it’s the U.S. that is “desperate” for an agreement.

“The president needs a win,” Cohn said in a Freakonomics Radio podcast. “The only big open issue right now that he could claim as a big win that he’d hope would have a big impact on the stock market would be a Chinese resolution.”

Cohn helped lead the push for the tax cuts that Trump and Republican lawmakers got into law in December 2017. But he disagrees with Trump on the merits of tariffs. He said he often tried during his time at the White House to convince Trump that tariffs made products that Americans buy more expensive and hurt the economy.

“I was losing the war on tariffs every day with the president. I knew I wasn’t convincing him I was right,” Cohn said. Kevin Freking, Washington, AP