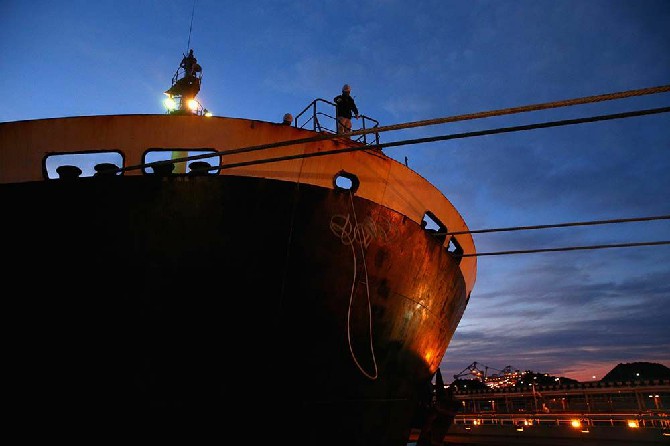 More than $500 million worth of Australian coal is on ships anchored off Chinese ports, as a diplomatic spat between the two countries cuts into trade, idles a portion of the world’s dry bulk carriers and threatens to spiral into a humanitarian crisis.
More than 50 vessels have been waiting a month or longer to offload coal from Australia, according to separate analyses of shipping data conducted by Bloomberg and data intelligence firm Kpler. There’s about 5.7 million tons of coal and approximately 1,000 seafarers on the anchored vessels, which are mostly Capesize and Panamax-sized vessels, according to Kpler.
The cargo and crew are victims of China’s move to blacklist a wide swathe of Australian commodities and foodstuffs, ratcheting up tensions between the two trading partners that have deteriorated since Huawei Technologies Co. was barred from building Australia’s 5G network in 2018. Chinese power stations and steel mills were told to stop using Australian coal and ports were instructed not to offload the fuel, Bloomberg News reported in October.
Recent trade measures taken by China were made to protect public health and are consistent with World Trade Organization obligations, Wang Xiaolong, director-general of the Ministry of Foreign Affairs’ International Economic Affairs Department, said this week in Beijing.
The ban on Australian coal has happened in tandem with a broader push to restrict imports of the fuel, a common tactic Beijing uses to prop up domestic coal prices and support local mining companies. China’s monthly coal imports recently fell to the lowest in nearly a decade, according to Wood Mackenzie.
But authorities may grant additional import quotas to keep a lid on prices as peak winter demand draws near. The benchmark Qinhuangdao port price has risen back above the intervention level of 600 yuan a ton this month, as efforts to increase domestic production fall short because of mine accidents in key provinces. Selected ports could get about 10 million tons of extra quota through the end of the year, Morgan Stanley said in a note Monday, citing traders and local media reports.
A total of 66 vessels loaded with Australian coal are positioned in Chinese waters, according to shipping data analyzed by Bloomberg, most of them off the northeast coast near the ports of Jingtang and Caofeidian.
Kpler identified 53 vessels holding Australian coal waiting about four weeks or longer to discharge at Chinese ports. Thirty-nine of the ships are carrying about 4.1 million tons of metallurgical coal. Australian coking coal for November on the Singapore Exchange closed at $101.57 a ton on Monday.
Nine vessels are carrying about 1.1 million tons of thermal coal, based on the Kpler analysis. The benchmark price for that type of coal settled at $63.40 on Monday on ICE Futures Europe. Another five vessels were carrying types of coal that weren’t identified.
Assuming that the unidentified cargoes were the cheaper of the two types, the value of coal on the vessels identified by Kpler is approximately $519 million.
Ships carrying coal from all exporters generally waited three to five days for a berth prior to China’s restrictions on Australian shipments, according to Kpler. Aaron Clark & Kevin Varley, Bloomberg