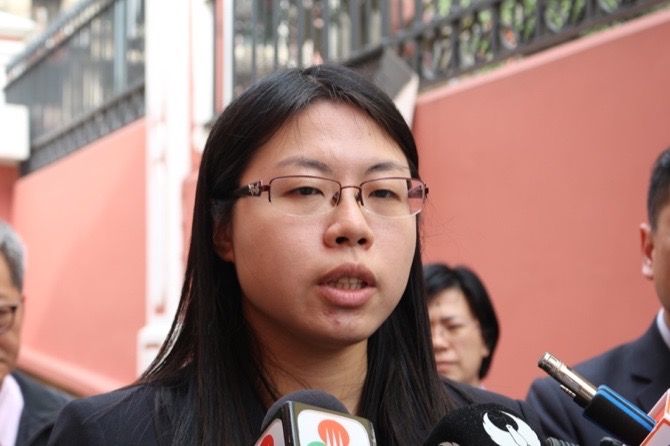 Lawmaker Ella Lei has confirmed to the Times that she and the Macau Federation of Trade Unions (FAOM) are currently working on the case of a woman who interrupted the Chief Executive’s policy address at the Legislative Assembly last month saying she was desperate for help with a labor dispute.

During the policy address, a rather peaceful “protest” occurred in the plenary room, whereby the woman rose from her spectator seat, stood next to the main door, holding an envelope that she claimed contained documents proving she had been unfairly dismissed by her employer.

She told the media that she had been fired by her previous employer on unreasonable grounds, leaving her with zero compensation.

Legislators Ella Lei and Leong Sun Iok intervened and promised to hear her case after the AL meeting session.

During her “protest,” the woman explained that she had filed complaints with the Labor Affairs Bureau (DSAL), but she did not receive the help she requested from the bureau.

Yesterday, lawmaker Lei confirmed that the woman had been in touch with several entities, the DSAL being one of them, and the FAOM another. Lei said that the case was proceeding according to the FAOM’s “existing procedures.”

According to Lei, the procedures include meeting with stakeholders in the case, such as the DSAL and the employer, as well as inspecting evidence provided by the client, which, in this case, are communications between the woman, the DSAL and other concerned entities.

The legislator could not provide a number as to the frequency of such cases in Macau, but she noted that laborers have become more aware of their legal rights in recent years, and are more prepared to use legal procedures to protect their rights.

However, the lawmaker commented that the labor law of Macau could not cope with the variety of new situations. “For example, there’s no provision in the law regarding compensation leave. Some companies even deliberately arrange regular days off to a statutory holiday [to take advantage],” Lei explained.

The incident at the AL occurred less than a week before the trade union law proposal was voted down by the city’s legislature for the 10th time. Ella Lei and Leong Sun Iok were two of 13 lawmakers that voted in favor of the proposal. Staff reporter