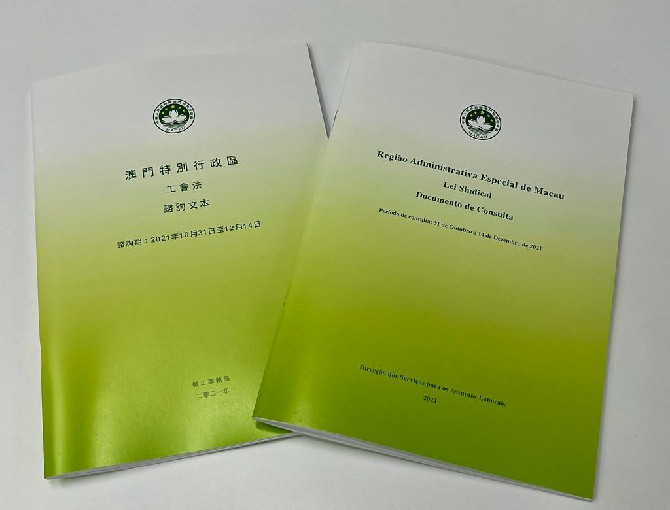 The government has finally launched a public consultation on the proposal to establish a Trade Union law in Macau.
The public consultation document, presented on Saturday by the Labour Affairs Bureau (DSAL), contains remarks on the government’s intent to create a regime that excludes some professional sectors. These include civil servants and other professions related to public services such as healthcare, transportation, and public utilities. The government intends to regulate their participation in professional associations through separate regulations.
Regarding the security forces, the government intends to completely exclude those working in these professions, citing the law’s incompatibility with their professional duties.
“Concerning professions or sectors that provide services in response to the basic needs of the population — for example, sectors of public interest including water supply, electricity, public transport, and communication infrastructure, among others, as well as the health sector that assumes the responsibility of saving lives — it is necessary to maintain [their] continuous functioning, to guarantee the interests of society,” the public consultation document reads, in the chapter concerning the law’s scope and application.
The same document adds: “Considering the public interest, it seems appropriate, except for agents of the security forces and services, to establish regulations on the exercise of trade union rights for workers in certain professions.”
The matter of these restrictions informs a series of questions in the public consultation. The government is calling on the public to express an opinion on which, if not all, professions should be included under a separate regime due to their direct impact with people livelihood.
The decision to exclude the security forces and services, as well as creating a special regime for civil servants and other public service workers, was said to come from reviews and comparisons of similar regulations enforced by several other countries and regions, including Singapore, Malaysia, Portugal, mainland China, Hong Kong, and Taiwan.
According to DSAL, “most of those countries or regions establish provisions for two types of professions (militarized personnel and public service workers) concerning organizing and participating in trade union associations, or even exercising the right of associations, which are different from those of workers in general.”
The DSAL officials also claim that the exclusion of the members of security forces and services from the union law is also justified by the terms of their bylaws and statutes regarding their duties. These bylaws state that these workers must “[abstain] from being affiliated with any associations of a political or union nature, or participating in any activities carried out by them, as well as presenting or promoting petitions addressed to the government or hierarchical superiors on matters of a political or service nature,” among other duties.
The same officials also said that a significant component of the preparation of the trade union law was “finding a balance” between the rights of citizens and the duties imposed by professions, especially in the case of civil servants and other public-services workers.
The public consultation was open to comments and input from the public as of yesterday, and will remain so until December 14 — a total of 45 days.
Additionally, the DSAL will also hold four public sessions where the public can express their opinions in person.
The sessions will take place at the World Trade Center building, on November 7, 12 and 27, and December 5.
Registration and submission of opinions can be done online via a specially dedicated page for this public consultation, available only in Chinese and Portuguese languages.