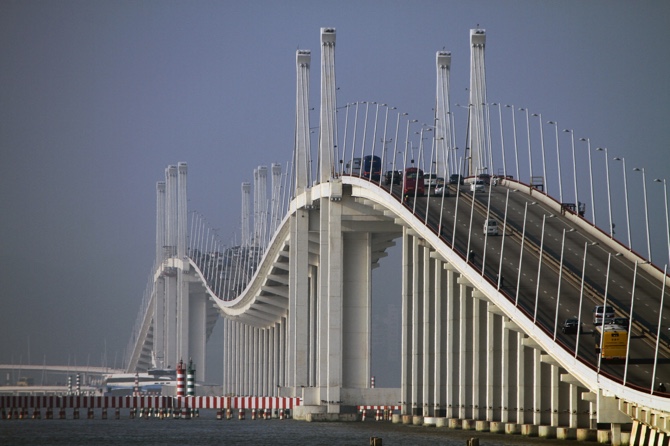 A car crash on the Amizade Bridge yesterday involving a seven-seater and an open-roof truck has killed a foreign worker.

Early investigation by the police raised the possibility that the truck lost power while climbing the slope of the bridge. Two workers disembarked from the truck to try to push it forward.

In the meantime, the driver of the seven-seater drove the car out from its original lane in an attempt to overtake the car in front, but only spotted the slow moving truck once it was too late to avoid contact.

The two workers were hit by the seven-seater, with one sustaining severe injuries. Images taken by Chinese-language news outlets showed the worker lying on the ground without any signs of movement. A large amount of blood was also seen around his body.

The other worker sustained minor injuries. Both workers were sent to the hospital. The severely injured worker was reported dead later.

The seven-seater is owned by a VIP gaming promoter. The paint on the truck, on the other hand, indicates that it is owned by a laundry company. The police disclosed that both drivers are local residents and both have passed the post-accident alcohol test.

Disembarking a vehicle on major roads such as those on the Amizade Bridge, can be extremely dangerous. A guideline on car breakdowns issued by the Transport Department of the Hong Kong SAR government notes that, in case their vehicles break down, drivers should “leave their vehicle (by the left-hand doors) only if they are sure they can safely get clear of the carriageway. If in doubt, remain in the vehicle wearing a seat belt until the emergency services arrive.”

On Saturday, another crash involving a seven-seater occurred in the parking lot of Galaxy Entertainment Group’s Cotai property. The driver, who works as a valet parking agent at the resort, was injured. The Fire Services Bureau deployed a team to rescue him before sending him to the hospital.

Information from the police indicated that the driver was a male local resident aged 46.

The accident took place in the underground parking lot of the resort. Images showed that the car crashed against a wall, causing significant damage to the front of the vehicle. Gasoline leaked out from the car, and all airbags were deployed.

Although police believed further investigation was required to determine the cause of the crash, it was suspected at the scene that the driver failed to turn the car after going down a slope.