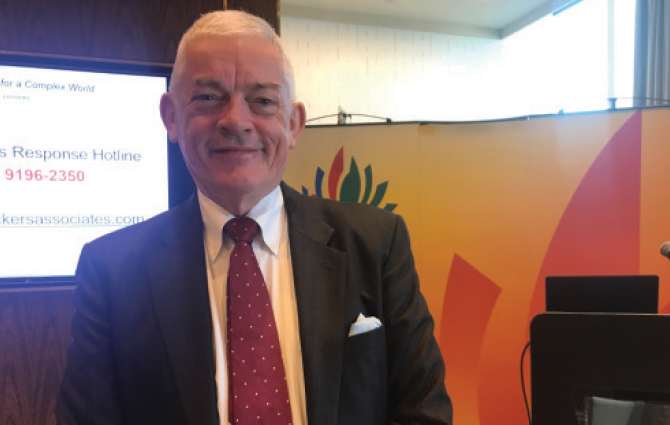 Steve Vickers, CEO of Steve Vickers Associates, has said that casinos in Macau remain vulnerable to terrorist attacks despite the city’s recent efforts to improve readiness. He also noted that efforts have been made to increase the difficulty of securing firearms and explosives.

Speaking at the morning event of the British Business Association of Macau (BBAM), Vickers told the press that Macau remains an easy target for terrorists because important statistics are publicly and easily accessible.

“Macau is easy to target. It’s quite transparent here. The numbers are largely published. On the other hand, Macau is so large in [the] gaming [sector] […] it’s an obvious target,” he said.

The CEO spoke about how triad activities in the region are prevalent and noted that it needs to be recognized as a problem in the SAR, particularly in the gaming sector.

According to him, there are gaps in the SAR’s legislation that have sustained triad actions.

“It remains unlawful to enforce a gambling debt in mainland China. The only people that can actually do that effectively are probably the triad,” Vickers explained.

“They have institutionalized themselves into a more professional organization but they’re still with us. The war against triads is still relentless,” the CEO of the corporate intelligence, security and consulting company added.

The expert then noted that action needs to be taken regularly to curb triad members from practicing illegal activities.

“We don’t [want to] forget what has happened here 10 to 15 years ago. It wasn’t that long ago,” said Vickers, who was probably referring to Wan Kuok-koi – popularly known as Broken Tooth – Macau’s notorious former gang leader.

Steve Vickers Associates specializes in risk mitigation and in this capacity they have suggested that the region should get accustomed to terrorism training occurring overseas, citing the significant number of people who have returned from Syria or moved from the west of China.

Although the move will not necessarily be a direct threat to Macau, Vickers stressed that the MSAR remains a “bright target” as it is an open city.

Vickers called on companies to take measures to mitigate reputation and regulatory risks.

In the current era, data protection will not hinder a data breach and subsequently the expert suggested a “360 degree look” at the different factors, including people risks, administrative risks, data risks, and legal risks.

“But I think it’s evolving. There is a lot more training, there are a lot more smart people. I think it’s getting better but the risks like the Paradise Papers leak and others show how vulnerable organizations are,” he explained. “Data protection itself wouldn’t save us,” the expert added.

Meanwhile, citing the region’s political stability and the recovery of gaming revenues, Vickers noted that the VIP sector remains under pressure due to Beijing’s anti-corruption campaign.

At the same time, continuous pressure on capital flow is affecting the upper and VIP market.

Although some measures have been enforced to fight money laundering in Macau, the risk solutions company noted that the harsh reality remains.

“I think the problem is not just Macau itself; the problem is Macau’s geo-political position and the wall of cash that is in our border [region],” he added.

However, the mainland crackdown on capital outflows – at the time it kicked in – coupled with the actions against underground banks and junkets, worked well for the region.

According to Vickers, it has helped curb a large number of “unhelpful” junket operators with strong triad connections.

“At least to squeeze them out of the market. In the big picture that has been helpful.”

Just last month, the European Union released a blacklist of 17 countries and territories, including Macau that it says are tax havens as it seeks to strengthen its fight against opaque practices that facilitate avoidance for multinationals and individuals.

The expert said the move was not a surprise as elements of the Union have an anti- offshore center focus that to a certain extent is led by the Germans.

“Truthfully, we still do have a problem in Macau with certain elements: triad elements associated with junkets. This is an issue. But I was surprised that they focused on Macau exports to the extent that they did,” he reiterated.

Comparing Macau to other offshore jurisdictions, the expert noted that no other jurisdiction is in the same bracket as that of Macau’s acquisitions.

“The difference between Macau and everybody else is the scale of activity here is untouched by anybody else,” he shared.

He also said that he believes that Macau’s efforts to foster diversification are well-conceived and important.

A report issued by the company stated that relative political stability and a recovering economy promise a positive 2018 in the MSAR, despite risks deriving from the approaching negotiations of casino concessions – which will take place ahead of 2020 and 2022 – and also predicts the continuing triad involvement in the region’s gaming sector.