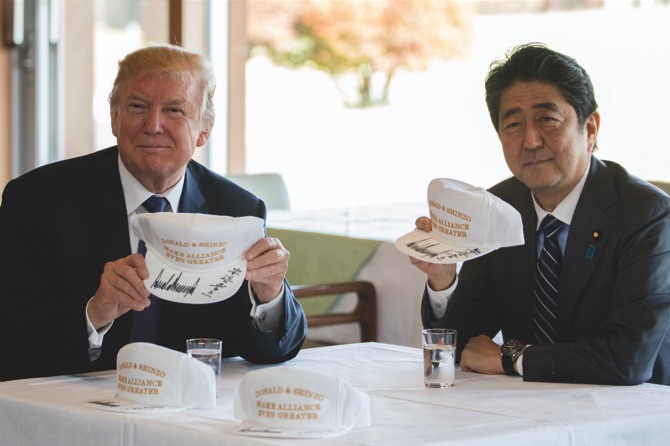 Trump and Abe hold up hats they have both signed that read “Donald and Shinzo, Make Alliance Even Greater”

President Donald Trump praised Japan as a “crucial ally” and warned adversaries not to test America’s resolve yesterday as he opened a grueling and consequential first trip to Asia.

Trump landed at Yokota Air Base on the outskirts of Tokyo and was greeted by cheering service members. Trump then donned a bomber jacket for a speech in which he touted American firepower and the U.S. alliance with Japan.

“Japan is a treasured partner and crucial ally of the United States and today we thank them for welcoming us and for decades of wonderful friendship between our two nations,” he said, speaking in front of an American flag inside an airplane hangar.

Trump was expected to spend much of his 12-day, five-country Asian tour exhorting allies and rivals to step up efforts to counter the dangers posed by North Korea, which continues to move forward with its nuclear weapons program. Trump and North Korean leader Kim Jong Un have been engaged in an escalating war of words, with Trump repeatedly referring to Un as “Little Rocket Man” and threatening in a recent speech to “totally destroy” the nation, if necessary.

Even before he landed, Trump used the first moments of the trip to denounce the North as “a big problem” that must “be solved.”

“There’s been 25 years of total weakness, so we are taking a very much different approach” toward the North, he told reporters traveling with him. 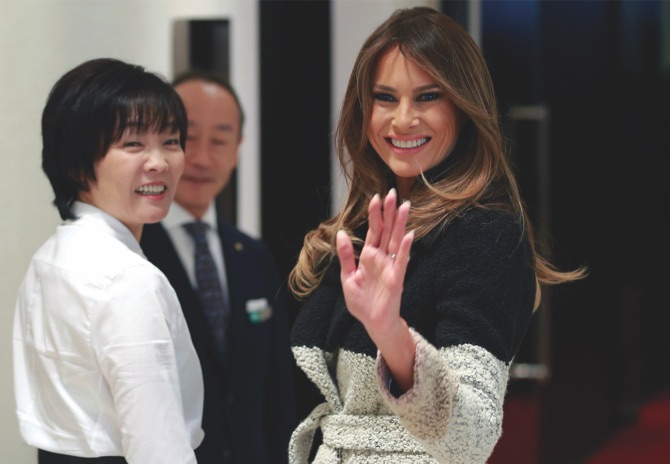 During the speech, Trump did not mention North Korea by name, but warned of the consequences of crossing what he called the “most fearsome fighting force in the history of our world.”

“Together with our allies, America’s warriors are prepared to defend our nation using the full range of our unmatched capabilities. No one — no dictator, no regime and no nation — should underestimate, ever, American resolve,” Trump told the troops.

Some regional analysts have speculated that Trump’s presence in Asia may prompt North Korea to take provocative action, like another missile test.  Trump, when asked about that possibility aboard Air Force One, said “we’ll soon find out.”

After the speech, Trump flew by helicopter to the Kasumigaseki Country Club about 20 miles outside of Tokyo for lunch and a round of golf with Japan’s Prime Minister Shinzo Abe and Japanese golfer Hideki Matsuyama. An avid golfer, Trump said Matsuyama is “probably the greatest player in the history of Japan.”

Trump and Abe have struck up a personal friendship, forged through multiple meetings and telephone conversations, as well as on the greens of one of Trump’s Florida golf clubs and over intimate dinners at Trump’s Florida estate.

At the club, the leaders signed white caps inscribed with the phrase, “Donald and Shinzo: Make Alliance Even Greater,” a tribute to the U.S.-Japan friendship and a play on Trump’s campaign slogan. On the menu: a hamburger made from U.S. beef.

The trip, which marks the longest Far East itinerary for a president in a generation, comes at a precarious moment for Trump. Days ago, his former campaign chairman was indicted and another adviser pleaded guilty as part of an investigation into possible collusion between Trump’s 2016 campaign and Russian officials.

The journey will also test Trump’s stamina. But the 71-year-old president assured reporters that he was up for the task. “It’s grueling, they tell me, but fortunately that’s historically not been a problem for me. One thing you people will say, that’s not been a problem,” he said.

The visit will be closely watched by Asian allies worried that Trump’s inward-looking “America First” agenda could cede power in the region to China. They also are rattled by his bellicose rhetoric toward North Korea. The North’s growing missile arsenal threatens several of the capitals Trump will visit.

The trip will also put Trump in face-to-face meetings with authoritarian leaders for whom he has expressed admiration. They include China’s Xi Jinping, whom Trump has likened to “a king,” and the Philippines’ Rodrigo Duterte, who has sanctioned the extrajudicial killings of drug dealers.

Trump is also expected to have a second private audience with Russian President Vladimir Putin on the sidelines of a summit in Vietnam. Trump told reporters he “will want Putin’s help” in dealing with North Korea. They previously met during a summit in Europe this summer.

The White House has signaled that Trump will push American economic interests in the region, but the North Korea issue is expected to dominate the trip. One of Trump’s two major speeches will come before the National Assembly in Seoul. But fiery threats against the North could resonate differently than they do from the distance of Washington.

Trump will forgo a trip to the Demilitarized Zone, the stark border between North and South Korea. All U.S. presidents except one since Ronald Reagan have visited the DMZ in a sign of solidarity with Seoul. The White House contends that Trump’s commitment to South Korea is already crystal clear, as evidenced by his war of words with Kim and his threats to deliver “fire and fury” to North Korea if it does not stop threatening American allies.

The escalation of rhetoric, a departure from the conduct of past presidents, has undermined confidence in the U.S. as a stabilizing presence in Asia.

“There’s a danger if there is a lot of muscle flexing,” said Mike Chinoy, a senior fellow at the U.S.-China Institute at the University of Southern California. “Trump has been going right up to the edge and I wouldn’t rule out some sort of forceful North Korean reaction to Trump’s presence in the region,” he said.

The White House said Trump would be undeterred.

“The president will use whatever language he wants to use, obviously,” White House national security adviser H.R. McMaster told reporters before Trump departed Washington. “I don’t think the president really modulates his language, have you noticed?” Jonathan Lemire, Jill Colvin, AP