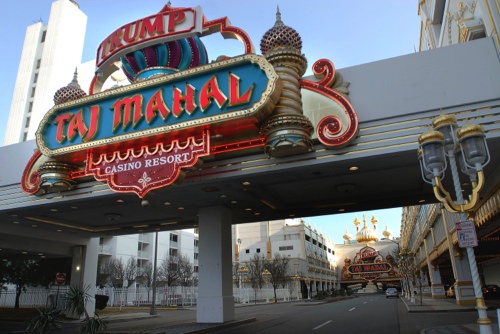 Trump Entertainment Resorts Inc., the company founded by Donald Trump, will file for bankruptcy again this week, people with knowledge of the situation said, putting a fifth Atlantic City casino in danger of closing.
The company owns two properties in the struggling New Jersey resort town. Trump Plaza is set to cease operations on Sept. 16, and the Trump Taj Mahal may also shut in November, the people said. Three other casinos have closed in the city this year, including Caesars Entertainment Corp.’s Showboat and the Revel Casino Hotel last week.
A Taj Mahal shutdown would put another 2,800 employees out of work in a city already losing 5,200 casino jobs this month. Moody’s Investors Service cut the municipality’s bond rating by two steps on July 23 to Ba1, the highest speculative standing. Governor Chris Christie and other local leaders held a summit Monday to discuss Atlantic City’s future after an expansion of gambling in neighboring states ate into what was once the only legal market on the East Coast.
“What happened to Atlantic City, there’s a lot of competition from a lot of other locations,” Trump said in a telephone interview Monday. “It’s happening all over.”
Trump has no active role managing the company. Robert Griffin, chief executive officer of Atlantic City-based Trump Entertainment, declined to comment.
The expansion of legalized gambling in Maryland, Pennsylvania and New York prompted seven straight years of declining revenue in Atlantic City. High labor costs and real-estate taxes have also crimped profits.
Christie, 52, a second-term Republican, met behind closed doors Monday with political leaders and casino officials on strategies to build Atlantic City revenue on non-gambling attractions including entertainment and retail. The summit comes four years into his five-year plan to revitalize the city.
On Monday Christie signed an executive order allowing the state’s casinos and racetracks to accept sports bets, as long as they don’t involve New Jersey college matches.
Speaking to reporters after the meeting with lawmakers, casino executives, a union representative and city officials, Christie said the Taj Mahal closing didn’t arise as a topic of the discussions.
The talks were focused on finding what he called larger short- and long-term solutions to help Atlantic city adjust to gambling on a smaller scale, he said. Christie repeatedly declined to discuss specifics of the meeting, calling it a “candid discussion.”
Atlantic City casino revenue fell to USD2.9 billion last year, from a peak of $5.2 billion in 2006. The drop means less money for New Jersey, which collects an 8 percent tax from casinos and dedicates the money – $205 million last year – to programs for senior citizens and the disabled.
Lawmakers, trying to save the state’s declining gambling revenue, have proposed allowing slot machines in Northern New Jersey. Voters may be asked as soon as November 2015 to overturn an almost 40-year-old law that gave Atlantic City a monopoly on casinos in the state.
Senator Raymond Lesniak, an Elizabeth Democrat, said the move would help the ailing city because lawmakers can direct new money there.
A bankruptcy court reorganization could give Carl Icahn two additional hotels in the city. Funds controlled by the New York- based billionaire are Trump Entertainment’s largest creditor, according to public filings. Icahn also controls 68 percent of Las Vegas-based Tropicana Entertainment Inc., which owns the Tropicana in Atlantic City.
A bankruptcy filing could set up a fight between Trump and Icahn in bankruptcy court. Trump filed a lawsuit last month asking that his name be taken off the properties. He licensed his brand to the company on a royalty-free basis as part of an earlier restructuring, according to public filings. The agreement prohibits him from using the Trump name for a gambling business in six East Coast states, including New York.
“It’s not that we’re demanding rights,” Trump said in a telephone interview. “We just want the name taken off the building. We have the hottest hotel portfolio in the world right now. They are not operating the hotel in accordance with our very high standard.”
The Trump Taj Mahal lost $35 million on revenue of $108 million in the first six months of this year, according to a filing with the state’s Division of Gaming Enforcement. Trump Plaza showed a loss of $9.8 million on revenue of $28 million in the same period. That casino is closing after unsuccessfully searching for a buyer since 2011, according to a state filing. Christopher Palmeri, Elise Young and Michael Bathon, Bloomberg