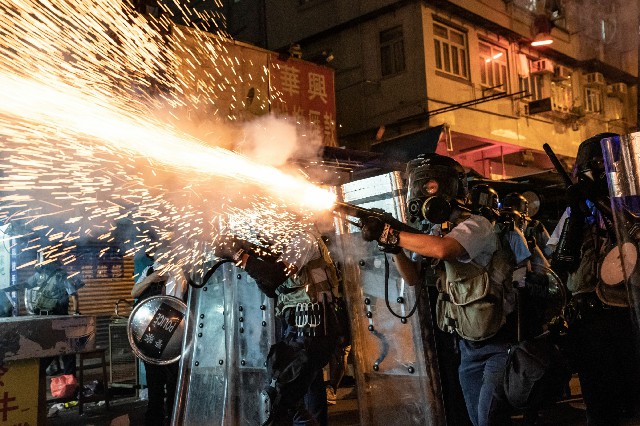 U.S. President Donald Trump is expected to sign legislation passed by Congress supporting Hong Kong protesters, setting up a confrontation with China that could imperil a long-awaited trade deal between the world’s two largest economies.
The bill, approved unanimously by the U.S. Senate on Tuesday, passed the House 417-1 on Wednesday and could go to Trump as soon as today [local time]. A person familiar with the matter said Trump planned to sign the bill.
“The Congress is sending an unmistakable message to the world that the United States stands in solidarity with freedom-loving people of Hong Kong and that we fully support their fight for freedom,” Speaker Nancy Pelosi, a California Democrat, said on the House floor. “This has been a very unifying issue for us.”
The remarkable bipartisan support for a hard-line U.S. stance on China creates one of the toughest economic and foreign policy challenges of Trump’s presidency. He would like to sign what he calls “phase one” of a China trade deal to ease economic uncertainly stemming from his trade war with Beijing as he ramps up his campaign for re-election.
China’s foreign ministry urged the U.S. to prevent the legislation from becoming law, warning the American side not to underestimate the country’s determination to defend its “sovereignty, security and development interests.”
“If the U.S. insists on going down this wrong path, China will take strong countermeasures,” ministry spokesman Geng Shuang told a regular briefing yesterday in Beijing.
The bill, S. 1838, would require annual reviews of Hong Kong’s special trade status under U.S. law and sanction officials deemed responsible for human rights abuses and undermining the city’s autonomy. The House also passed another Senate bill, S. 2710, to ban the export of crowd-control items such as tear gas and rubber bullets to the Hong Kong police.

‘Ramifications’ for Crackdown
Trump has been largely silent on the Hong Kong protests as they escalated into violence in recent weeks, even as lawmakers of both parties demanded action.
“After the Senate unanimously passed our Hong Kong Human Rights and Democracy Act, I applaud Speaker Pelosi for taking swift action to send this bill directly to President Trump’s desk for signature,” said Senator Marco Rubio, a Florida Republican and a sponsor of the Senate legislation. “I urge the president to sign this critical bill into law as soon as possible.”
“We stand in solidarity with the people of Hong Kong,” said Republican Representative Chris Smith, who has been pushing the legislation since Hong Kong protests in 2014. “There will be strong sanctions, other ramifications for this crackdown.”
The Democratic-led House used an expedited process to quickly act on the Senate bill rather than trying to reconcile it with a slightly different version the House unanimously passed last month. That was the quickest way to approve the legislation before Congress recesses for the Thanksgiving holiday next week.
China also came up in the Democratic presidential debate in Atlanta, with former Vice President Joe Biden promising to “be vocally, vocally speaking out about the violation of the commitment they made to Hong Kong.” Asked specifically about how he would support the city’s demonstrators, Senator Cory Booker of New Jersey vowed to “call China out for its human rights violations” while Andrew Yang said he would build an international coalition to pressure Beijing on such issues.
Republican senators have been among the loudest voices calling for harsh consequences for China’s crackdown on protesters in Hong Kong. Senator Josh Hawley, a Republican from Missouri, wrote to United Nations Ambassador Kelly Craft asking for a resolution “to condemn and hold accountable the People’s Republic of China” for human rights violations in Hong Kong.
Trade Risks
Senate Majority Leader Mitch McConnell, a Kentucky Republican, called on Trump to speak out, saying Monday that “the world should hear from him directly that the United States stands with” the protesters.
Vice President Mike Pence, however, said it would be difficult for the U.S. to sign a trade agreement with China if demonstrations in Hong Kong are met with violence. “The president’s made it clear it’ll be very hard for us to do a deal with China if there’s any violence or if that matter is not treated properly and humanely,” Pence said Tuesday in a radio interview.
Trade negotiators are still making delicate progress on an accord, according to people close to the talks, who describe the negotiation as entering a make-or-break stage.
Trump’s central argument to voters is the strength of the U.S. economy under his presidency and his ability to cut deals with other countries. Signing the Hong Kong bill could harden China’s negotiating position as the U.S. asks China to buy more agricultural products and Beijing insists that the U.S. reduce tariffs on Chinese goods.
The Hong Kong government said yesterday that allowing the legislation to become law “would send the wrong signal to violent protesters, which doesn’t help in cooling the situation.” Daniel Flatley & Justin Sink, Bloomberg