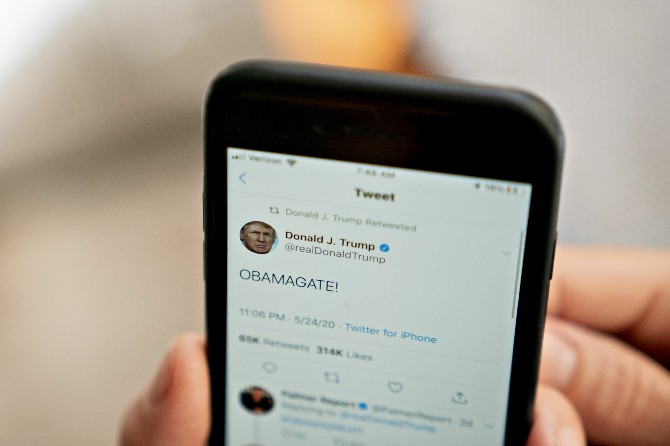 Donald Trump has been raging against Twitter Inc. since the social media platform that helped vault him to the presidency slapped fact-check links on a pair of his tweets.
Now, he’s poised to take action that could bring a flurry of lawsuits down on Twitter, Facebook Inc. and other technology giants by having the government narrow liability protections that they enjoy for third parties’ posts, according to a draft of an executive order obtained by Bloomberg.
The companies’ protections against lawsuits apply when they act “in good faith” in taking down or limiting the visibility of inappropriate tweets, videos and other social media posts, but the law doesn’t define bad faith. The draft order would push the Federal Communications Commission to issue rules clarifying the issue, potentially allowing users to sue over takedowns if they were inconsistent with companies’ terms of service, did not provide enough notice or meet other suggested criteria.
The White House declined to comment yesterday.
The draft order would also convene, through the Justice Department, a working group of state attorneys general to look into deceptive practices and review executive ad spending on the platforms.
The move could set off a legal battle between Washington and Silicon Valley.
“Big Tech is doing everything in their very considerable power to CENSOR in advance of the 2020 Election,” the president said Wednesday night – on Twitter. “If that happens, we no longer have our freedom. I will never let it happen! They tried hard in 2016, and lost. Now they are going absolutely CRAZY. Stay Tuned!!!”
Word of the executive order came a day after Twitter added links to a fact-checking page on Trump tweets asserting that mail-in-voting leads to rampant fraud.
As Trump himself has observed, Twitter gives him the power to dodge the media and speak directly to the American public. It also allows the president and his vast community of followers to instantly spread a steady stream of pro-Trump messages and attacks on his rivals, including exaggerations and outright falsehoods that not even Twitter’s fact-checking links can dent.
He has no legal authority to shut down the service, as he threatened to do Wednesday morning, but doing so would mean silencing his loudest megaphone – as well as what his campaign calls “keyboard warriors” who both amplify his voice and provide him memes and other free content to broadcast to his 80 million followers.
Twitter also serves as a valuable punching bag, which he uses to generate outrage and sympathy among his supporters.
The social media platform has become even more important for Trump as the coronavirus pandemic prevents him from holding his trademark rallies, and he seeks a free outlet to attack his likely Democratic challenger, Joe Biden.
“He’s going to need to continue to use this platform,” said Amy Becker, a professor at Loyola University Maryland, who focuses on political communication. “It’s going to be his random tweets, it’s going to be him attacking whoever criticizes him, there’s going to be a lot of attacks on Biden, the Democrats.”

Liability protections
The order Trump plans to sign is his latest attempt to exert control over the formidable technology industry. In 2018, he considered issuing an order instructing federal antitrust agencies to open probes into the practices of tech giants like Alphabet Inc.’s Google and Facebook. The possible measure was criticized as politicizing antitrust enforcement and it was never signed.
Trump’s attacks on Twitter and other social media companies are often hyperbolic and rarely lead to immediate concrete action. The government could never silence a company like Twitter without violating First Amendment rights to free speech. However, his threats are a reminder of other significant levers that the president and the rest of the federal government have at their disposal.
Senator Josh Hawley, a Missouri Republican, wrote Twitter Chief Executive Officer Jack Dorsey on Wednesday to demand an explanation for the fact-checking links added to Trump’s tweets. He accused the company of choosing to “editorialize.”
Hawley repeated a threat that’s been raised by other lawmakers over the years: Revoking the protections that shield Twitter and other platforms from legal liability for content its users post.
“Politicians can use the powers of government to make life very difficult for private companies and there’s a long track record of politicians from both parties doing this in the last couple years to social media companies,” said Jesse Blumenthal, a conservative who leads tech policy at Stand Together, part of the political network affiliated with libertarian billionaire Charles Koch.
In recent days, Trump had tweeted attacks on cable news host and former Republican Representative Joe Scarborough by pushing a baseless conspiracy theory that he was involved in the death 19 years ago of a woman who worked at his district office in Florida. Her widower sent a letter to Twitter asking the publicly traded company to delete Trump’s tweets, but it chose to leave them online.
Scarborough is a frequent critic of the president.

80 million followers, 52,000 tweets
The feud with Twitter comes as Trump has been under siege for his handling of the coronavirus pandemic that’s infected more than 1.6 million Americans and killed some 100,000. He trails Biden in general election polls by an average of 5.3 percentage points, according to RealClearPolitics.
There has never been a politician as prolific on social media, which he often uses to call opponents names, spread conspiracy theories, dismiss employees and announce policy changes. He has sent more than 52,000 tweets and has more than 80 million followers.
Trump has both acknowledged the power he wields when he tweets and the platform’s impact on his 2016 election. At a July 2019 social media event at the White House he boasted about using Twitter to announce that the U.S. would recognize Israel’s sovereignty over the Golan Heights, one of the world’s most contentious foreign policy issues.
“Boom,” Trump said of the March 19 tweet. “I press it and, within two seconds, we have breaking news.”
At that same event he acknowledged that without the platform he might not have been elected.

‘Keyboard warriors’
Trump has a symbiotic relationship with his supporters on Twitter. They often create memes that go viral with his retweets. Earlier this month, he retweeted a meme of himself as the president giving a speech in the 1996 movie “Independence Day,” about an alien invasion. That meme has been viewed 18 million times on Twitter.
He’s repeatedly promoted a twitter handle that goes by the name of @sexcounseling that reinforces his messages. Earlier this month he egged on his supporters online with the hashtag obamagate, alleging that President Barack Obama’s administration improperly tried to undermine his election campaign in 2016. His supporters tweeted a series of memes with Obama and Biden.
“Thank you to all of my great Keyboard Warriors. You are better, and far more brilliant, than anyone on Madison Avenue (Ad Agencies). There is nobody like you!,” Trump said in a May 14 tweet.
Tim Murtaugh, a Trump campaign spokesman, defended the president’s use of Twitter.
“Most Americans have a pretty clear understanding of the way that President Trump uses Twitter,” Murtaugh said Wednesday on Fox News. “Twitter is a way for the president to connect with his voters. We hear all the time from the president’s supporters that they like the way that the president expresses himself on Twitter because they say to this day they say listen here’s a guy who finally says the things out loud that I’m thinking to myself.”
Going back to the 2016 campaign, Trump and his campaign have cultivated a relationship with his supporters online. That part of his base remains engaged, echoing and spreading his messages, said Eric Wilson, a Republican digital strategist.
“The most effective endorsement for a candidate is from someone that you already trust, that you already have a relationship with,” Wilson said. Ben Brody, Mario Parker & Eric Newcomer, Bloomberg