A ‘trumpet evolution’: Arturo Sandoval brings the flavors of Cuban jazz to town 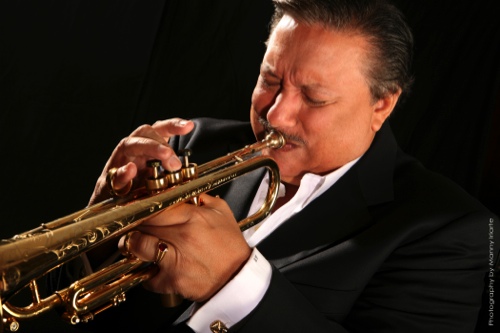 Growing up in a small village in the colorful Cuban countryside, Arturo Sandoval seized every chance he could to play music. He soon embarked on a journey to find the perfect instrument. After a few failed attempts, the trumpet felt like an ideal choice, charming him with its twofold capacity of soft whispering tones yet also the possibility of creating “huge noise.”
From a small Cuban town to America, Sandoval worked his way up to become a world-renowned jazz trumpet player, and has now won 10 Grammy Awards, one Emmy and a Presidential Medal of Freedom. On Saturday August 30, Sandoval and his talented quintet will take the stage at the Venetian Theatre in Macau.
Now 64, Sandoval plays the trumpet everyday. His love for such a high-maintenance yet passionate instrument truly began 51 years ago while he was growing up in Artemisa, on the outskirts of Havana, Cuba.
“When I was little I started banging on everything in my house, trying to make music on everything. My grandmother said, ‘he is crazy, he thinks he is a musician or something,’” he recalls.
As time passed, he saw his tiny village form its own marching band. From the outset Arturo knew he had to join them. Picking an instrument, however, would prove to be a hard task. First given a trombone, Arturo soon realized it was unfortunately not the right instrument for him. The same happened with a bass drum, which was to heavy to carry, and the flute made him dizzy.
“And finally I started to eye the trumpet,” he recalls. But there were no trumpets left, he was told. The band’s manager told him however that if he could find a trumpet, he could still play.
“My aunt bought me a pocket cornet. Then someone recommended that I visit an old man in the village who played the trumpet. He asked me to play something, and I played what I could,” Arturo recalls.
The old man’s reply would trigger Arturo’s resolve to become a true jazz trumpet player. “He said ‘put the trumpet in the case, you will never amount to being a trumpet player.’ I left and got very upset and it became a challenge to me to prove him wrong, and that has been what I have been doing for the past 51 years,” he told the Times in an email interview.
Looking back, Sandoval recalls how trumpeter and bandleader Dizzy Gillespie was the first jazz musician he ever heard. An American citizen, Dizzy was involved in the Afro-Cuban music movement, which aimed at incorporating an Afro-Latin American flavor into jazz as well as pop music.
Sandoval became Gillespie’s protégé when he was 26 years old. While touring alongside Gillespie in 1990, he defected to the United States of America, later becoming a naturalized American citizen.
The Cuban-born artist has evolved to become one of the most recognized jazz musicians in the world. He has played with pop artists such as Celine Dion, Justin Timberlake and Alicia Keys. Sandoval’s life has also been portrayed in the HBO film “For Love or Country.”
He plays regularly with symphony orchestras across the globe and has released several albums featuring both classical and jazz orchestras.
Amongst his most famous and recent albums are ‘Trumpet Evolution,” “From Havana with Love,” “Arturo Sandoval & the Latin Jazz Orchestra,” “A Time for Love,” and “Dear Diz.”
His love for jazz and trumpet hasn’t withered over time. Quite the opposite, he says. Sandoval believes that his music has changed while he’s aged, particularly as a result of his accumulated feelings and experiences.
Meanwhile, his energy to play the trumpet hasn’t faded away. He still practices everyday, and music lingers around him 24/7. “I wake up in the morning. I play the piano. And of course I practice the trumpet every day, because it is a high-maintenance instrument.”
Last year, he was granted a Presidential Medal of Freedom by American president Barack Obama. He considers it to be “a big deal,” especially because he loves the United States of America.
“The name of the award is something that I like very much. It represents freedom, because without freedom, there is no life,” he tells us.
Alongside his quintet, Sandoval will perform on August 30 at 7:45 p.m. at the Venetian Theatre, as part of Venetian Macau’s seventh anniversary celebrations. Sandoval stated that he is looking forward to the concert, and promised that, “everyone is going to have a good time.”