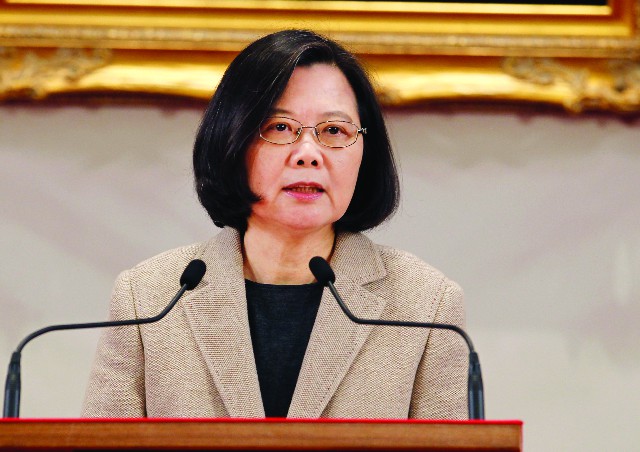 Taiwan’s president said unrest in Hong Kong showed Beijing’s “failure” in governing the city and vowed to defend her island’s sovereignty.
President Tsai Ing-wen vowed to fight for Taiwan’s survival in her National Day address yesterday, saying it faced “unprecedented change” in the world. She pointed to Beijing’s rule over Hong Kong, which has seen months of violent protests opposing China’s grip, as impetus to reject the “one country, two systems” principle through which it governs the financial hub – and which she said China wants to impose on Taiwan.
Taiwan would have “no space to survive once accepting ‘one country, two systems,’” she said. “Rejecting ‘one country, two systems’ is the biggest consensus among the 23 million people of Taiwan regardless of party affiliation or position.”
Coming three months before Taiwanese voters go to the polls, the neighboring chaos is just one of the battles China is fighting – along with halted broadcasts of some U.S. National Basketball Association games and a protracted trade war with President Donald Trump – that could boost Tsai’s hopes of re-election in January.
She currently has a more then 13 percentage-point lead over her main rival, popular Kaoshiung City mayor Han Kuo-yu of the China-friendly opposition Kuomintang party, according to a poll published in the Apple Daily newspaper Tuesday.
In contrast to last week’s massive National Day celebrations in the mainland, which focused on military bombast and featured President Xi Jinping driving through the streets of Beijing greeting troops, Taiwan’s was lower-key and highlighted immigration – including letting dozens of new immigrants lead the singing of the national anthem.
“When democracy is under threat, we need to stand up to guard it. Being a president, I need to guard sovereignty, to maintain Taiwan’s survival,” Tsai said yesterday.
While the People’s Republic has never controlled Taiwan, it claims the separately ruled island as part of its territory, a claim Tsai’s Democratic Progressive Party rejects.
Tsai, a longtime China critic, faces challenges in her closely-watched bid for re-election, including Beijing’s efforts to isolate Taipei diplomatically. Its success in persuading two of Taiwan’s diplomatic allies to switch recognition to China in the last month – the Solomon Islands and Kiribati – leaves Tsai with just 15 such partners worldwide.
But it also threatens to backfire as Taiwan’s election draws closer, with U.S. and Australian concerns about China’s growing footprint in the Pacific strengthening Tsai’s argument that Beijing poses a threat to both Taiwan and regional order.
The U.S. supports Taipei militarily, a key source of tension between Washington and Beijing. It made a show of support for Tsai yesterday as Senator Ted Cruz, a Texas Republican, attended the National Day celebrations in Taipei. He is the first U.S. senator to attend such a celebration in 35 years, according to statement from Taiwan’s foreign affairs ministry.
Senator Cory Gardner, a Colorado Republican, and Taiwanese Foreign Minister Joseph Wu also wrote an article Tuesday in the Hill newspaper, calling for strengthening Taiwan-U.S. relations to counter rising Chinese influence in the Pacific region. Miaojung Lin, Bloomberg