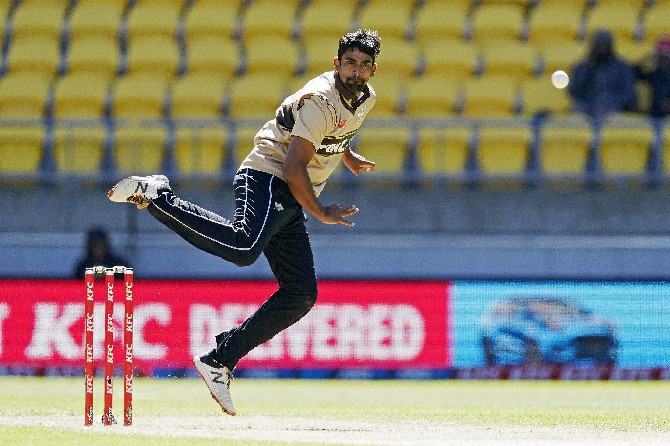 Ish Sodhi led a concerted attack by New Zealand’s spin bowlers before Martin Guptill smashed a quickfire 71 runs to set up a seven-wicket win over Australia in the fifth Twenty20 international yesterday and a 3-2 win in the five-match series.
Leg spinner Sodhi came into the match as the leading wicket-taker in the series with 10 at an average of 18 and improved to 13 at 11.8, taking 3-24 as Australia was held 142-8 after choosing to bat on winning the toss.
New Zealand surpassed that total with 27 balls to spare, steered by Guptill and Devon Conway who put on 106 for the first wicket in 11.5 overs.
Sodhi was supported during Australia’s innings by left-armer Mitchell Santner who took the new ball and bowled his four overs at a cost of only 21 runs. Having noted the influence of spin in the previous match in the series, New Zealand also used part-time spinners Mark Chapman, who took 1-9 from two overs, and Glen Phillips whose two overs cost 21 runs.
The spinners shared 12 of New Zealand’s 20 overs, more than in any of the Black Caps’ previous T20 internationals. That followed Australia’s record in the fourth match when Aston Agar, Adam Zampa and Glenn Maxwell bowled 11 overs.
The drop-in pitch at Sky Stadium hosted the last three matches of the series in the space of six days. Australia made 208-4 in the third match, winning by 64 runs, but in the fourth on a pitch which had slowed considerably and favored spin it defended a total of just 156-6, winning by 50 runs.
Until yesterday, each match in the series had been won by the team batting first. New Zealand won the first two by 53 runs and four runs but hadn’t previously been able to put together a substantial innings when chasing in Wellington.
It needed a stronger foundation from its openers: Guptill and Tim Seifert put on only 20 in the third match and 21 in the fourth as Australia fought back to level the series.
Conway was promoted to open with Guptill yesterday the new opening pair immediately struck gold, reaching their century partnership in the 12th over.
Guptill posted his 17th T20 from 33 balls and moved to second place behind Virat Kohli on the list to top run-scorers in T20 internationals.
The partnership finally was broken by Riley Meredith in the 12th over when Conway was caught in the deep for 36. There was a flicker of hope for Australia when New Zealand captain Kane Williamson fell lbw to Meredith first ball.
Guptill was out in the 15th over, having made 71 from 46 balls with seven boundaries and four sixes, and having set the foundation on which New Zealand’s win depended.
Phillips finished the job, hitting 34 from 15 balls with five fours and two sixes including a six for the winning runs in the 16th over off Adam Zampa.
“The other night we took a backward step and today we wanted to not back down from the fight and we showed that with a good opening stand,” Guptill said. “Today Devon (Conway) was brilliant out there.
“I wouldn’t say I went after them from ball one. But it was just good to spend a bit more time out there and create a partnership with Devon. He got off to a good start, I caught up and pushed on and the best part about it was we got the win.”
While Australia couldn’t contain Guptill, New Zealand managed to mostly neutralize Australia’s big hitters. AP