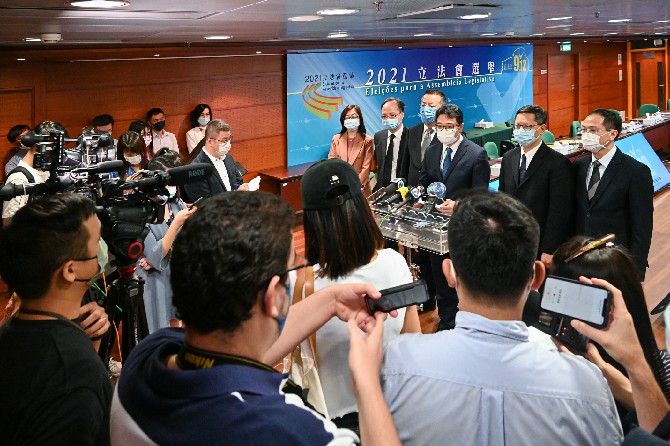 The upcoming Legislative Assembly election will have two fewer candidates participating, it was announced at a Legislative Assembly Electoral Affairs Commission (CAEAL) press briefing yesterday, with both withdrawing from the election.
Tong Hio Fong, president of the CAEAL, announced that two candidates from two different lists had filed a withdrawal from the election. The two candidates are Ho Ion Kong, first on list No. 10 – Ou Mun Kong I, and Wong Tit Kuan, second on list No. 13 – Macau Basic Law Marketing and Promotion Federation.
Although lists with fewer than four candidates were not accepted onto the ballot during the nomination phase, now that the lists have been confirmed by CAEAL, whether or not a list contains at least four candidates will not affect the list’s eligibility, Tong explained.
Trustee of the Ou Mun Kong I list, Lei Sio Kuan, told local media outlet All About Macau that he did not know the reason behind Ho’s withdrawal from the election. Lei underlined that the decision to run or not run in the election is a matter for Ho’s personal consideration. “He has the freedom to decide that,” Lei said.
Lei does not see any impact on the race with Ho’s departure, adding that campaign activities will go on as usual.
Lei was originally the first candidate on the list but was disqualified by the CAEAL – alongside 20 other original candidates – on the allegations of not upholding the Basic Law of Macau and not showing allegiance to the Macau Special Administrative Region.

Election contingencies
Tong revealed that, amid the Covid-19 pandemic, special measures will be levied on the election day. He reminds voters to screen capture their Health Code on the day prior to their departure for the polling station. Upon entry, their body temperature will be taken and their Health Code checked.
As in other venues, mask-wearing is mandatory.
A postponement of the election date cannot be ruled out should the situation deteriorate, Tong said.
Voters with a yellow health code will be allowed to cast their votes, but if necessary they will be required to take precautionary measures, such as glove-wearing while voting. Meanwhile, red health code bearers will be prohibited from voting and referred to the health authorities.
Backup polling stations will be set up in case certain stations are put under cordon.
The CAEAL will also regularly update reports on the flow of voters through various media to help voters decide when to visit a polling station. AL