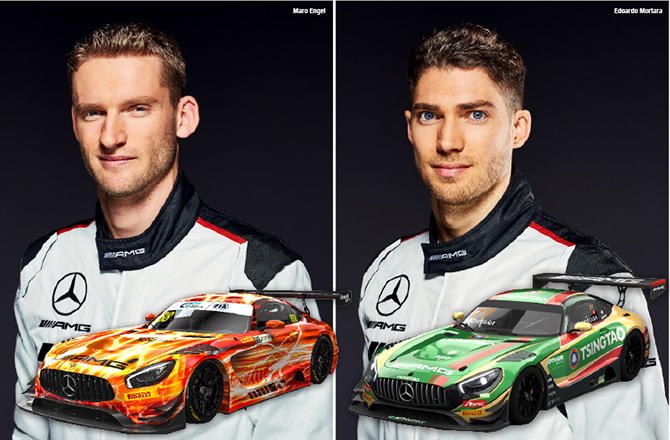 After several successful campaigns in previous editions, German Maro Engle and Swiss national Edoardo Mortara gear up once more for this year’s Macau FIA GT World Cup with one thing on their minds, to regain the title won in 2015 and 2017, respectively.

To learn more of their ambitions and feelings about the Macau racing event, the Times spoke with the two Mercedes-AMG Team racers in an exclusive interview ahead of this year’s event.

Macau Daily Times (MDT) – How long have you been racing in Macau?

Maro Engel (ME) – My first race here was in 2006 during the Formula 3 Grand Prix. This year will be my eighth time racing in Macau and my seventh time in the GT race.

Edoardo Mortara (EM) – My first race in Macau was in 2007, the Formula 3 Grand Prix. Since then, I have been racing here every year, so this year will be my 13th start.

MDT – How did the Macau GP impact your racing career?

ME – Winning the Macau GT Cup and the FIA GT World Cup was for sure one of the highlights of my career so far.

The victories in 2014 and 2015 were unforgettable moments for me. But I also like to think back to some other strong performances with the podiums in 2016, 2017 and 2018. In the end, it has always been a very special race for me.

EM – The Macau GP was very important for my career. Winning six times on one of the toughest racetracks around the world improved my reputation as a racing driver and it opened many doors for me.

Nowadays, the Macau GP is still a very important moment for me. If it wasn’t that important for me, I would have stopped racing here four or five years ago.

MDT – Mercedes has been one of the most successful cars in the FIA GT World Cup with several victories and podiums achieved. Last year BMW took the title, what can you do to take it back this year?

ME – We are a hundred percent motivated to take back the title. I believe we have all the ingredients to do that.

The Mercedes-AMG GT3 is a very strong car, and [we also have] strong teams backing us, in my case the GruppeM Team.

Personally, I feel ready. The race has been very close for the last three years, and I will give it everything to take back the title, that’s the aim.

EM – I think that we have a competitive car, a very good line-up and I hope that we can go for the overall victory. But this doesn’t depend only on the driver. We need good teamwork and (of course) a bit of luck.

MDT – What are the sections of the Guia Circuit that you like the most?

ME – To be honest, the whole racetrack is phenomenal. There is no other place like this in the world. It’s unique. It just feels incredible to drive on this track, especially with a car like the Mercedes-AMG GT3.
For sure, the fast section at the bottom is amazing, but I also really enjoy the top of the mountain with the flowing corners, which are tight together and then the following section to the Solitude Esses – it is also very special.

EM – The section that I like the most is the mountain part. There are a lot of medium-speed corners where you have to drive very precisely and accurately. As a driver, you can make the difference in this section, especially if you feel confident with the car. I’ve always been quite good there.

MDT – Who is going to win in Macau this year?

EM – If I knew it [in advance], I would place a bet on it (smile). I hope that it will be me. But it will be a tough competition.

If you take a look at the entry list, you see that there are a lot of very good drivers competing in Macau this year. Let’s see.

MDT – Having raced in Macau for some years and with several visits, what part of the city attracts you the most and why?

ME – It is incredible to see how Macau has developed over the years since I started racing here for the first time, especially how Taipa has developed. It’s an area that I enjoy visiting. There are lots of great dining opportunities, a lot of new hotels and restaurants.

But I also really like the old-traditional area of Macau [historical center] by the Ruins of Saint Paul’s. It’s a special feeling to go there and I try to pay a visit there every year whenever I’m in Macau.

EM – Normally, you don’t have much time during the race weekend to visit many parts of the city.

I have been to the old-traditional part, but also the new areas. I enjoyed both.

There are some good restaurants and places to relax after the race.

MDT – From all the tracks you ever raced in, which one is your favorite?

ME – Macau is definitely on the top of that list. But there are two other tracks in the world that I would rate equally: the legendary Nurburgring-Nordschleife, which is also an incredible track and Australia’s Bathurst. Together with Macau, these three tracks are by far the best in the world for me. I love racing on them.

The fifth FIA GT World Cup begins on November 14 at 12:35 pm for the first free practice session with the 18-lap race scheduled for November 17 at around the same time.