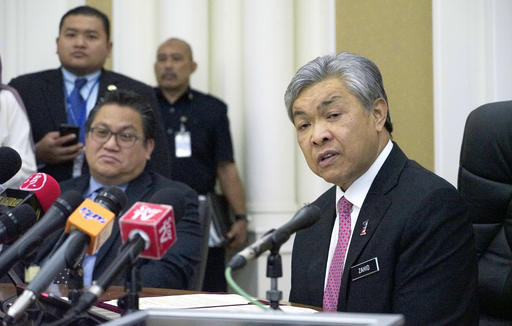 Malaysian Deputy Home Minister Zahid Hamidi, right, speaks to media during a press conference in Putrajaya, Malaysia, today (Thursday). Two women holding foreign passports have been arrested in the killing of the North Korean leader’s estranged half brother who was reportedly poisoned by a pair of female assassins who assaulted him as he waited for a flight this week in Malaysia, police said. (AP Photo/King Chai)

Two women and a man have been arrested in the killing of Kim Jong Nam, the North Korean leader’s half brother who was reportedly poisoned this week by a pair of female assassins as he waited for a flight in Malaysia, police said today (Thursday).

Investigators are trying to piece together the details of a death that set off a torrent of speculation over whether Kim Jong Un dispatched a hit squad to kill his estranged older sibling.

The suspects were picked up separately Wednesday and Thursday. The female suspects were identified using surveillance footage from Kuala Lumpur International Airport, where Kim Jong Nam suddenly fell ill Monday morning before dying on the way to the hospital.

One of the women had Vietnamese travel documents and the other held an Indonesian passport. There was no immediate way to determine if the IDs were genuine or if the women, both apparently in their 20s, were believed to be the alleged assassins.

A still photo of the airport surveillance video, confirmed as authentic by police, showed one of the suspects in a white T-shirt with “LOL” across the front.

On Thursday afternoon, police said they had detained a Malaysian man believed to be the boyfriend of the suspect with an Indonesian passport.

An autopsy was finished late yesterday (Wednesday), but the results have not been released.

More coverage on this topics in tomorrow’s (Friday) edition.