UK | Britain has a new princess – and eagerly awaits her name 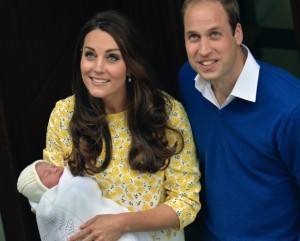 From Prince Charles to royal fans to most of those who put down a bet, millions in Britain were hoping for a girl.
The Duchess of Cambridge delighted her nation and royal enthusiasts around the world Saturday by delivering one such princess. The royal birth was greeted with cheers and elated cries of “Hip, hip, hooray!” outside St. Mary’s Hospital in London, where fans and the world’s media have waited for days.
The baby — Prince William and Kate’s second child — was born Saturday morning and weighed 3.7 kilograms, officials said. She is fourth in line to the throne and the fifth great-grandchild of 89-year-old Queen Elizabeth II. Britain hasn’t welcomed a princess born this high up the line of succession for decades.
It may be a day or two before the world knows what to call her. When Prince George, her older brother, was born in 2013, royal officials waited two days before announcing his name.
Speculation about the new royal’s name has been frenetic, and all the top bets for the baby’s name have been for girls: Alice and Charlotte are the clear favorites, followed by Elizabeth, Victoria and Diana — all names with strong royal connections. Royal children are usually given several names — the baby’s brother was christened George Alexander Louis — so the princess’s name could incorporate more than one of those guesses.
Anticipation had been building for weeks after Kate, 33, told a well-wisher she was due around late April. Still, journalists were caught slightly off guard when she delivered barely three hours after checking into the hospital at dawn Saturday. William, 32, was present at the birth.
The couple later emerged on the hospital steps with the infant to briefly pose for photographers before leaving for their home at nearby Kensington Palace. Kate, who wore a yellow-and-white floral shift dress by British designer Jenny Packham, held the sleeping baby wrapped in a white shawl.
The queen and senior royals were “delighted with the news,” officials said. The queen marked the occasion by wearing a pink ensemble while carrying out an official engagement in North Yorkshire, 250 miles north of London. Sylvia Hui and Danica Kirka, London, AP