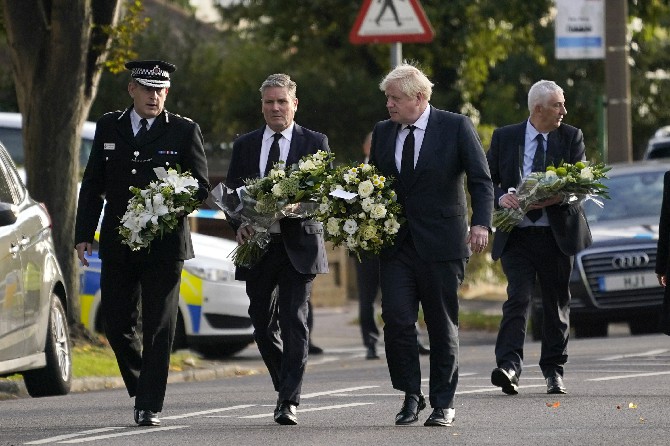 David Amess was a man of the people, a hard-working British lawmaker who had no grand political ambitions beyond serving those who had elected him for nigh-on 40 years.
His shocking death at the hands of a knife-wielding man at a church where he was meeting voters has reopened questions about the security needs of Britain’s members of Parliament as they go about their daily work.
Police, who have said it was a terrorist-related attack, continued Saturday to question a 25-year-old British man.
For the second time in five years, Britain’s political leaders put their differences aside to gather Saturday at the scene of a fallen colleague. British Prime Minister Boris Johnson and Keir Starmer, leader of the opposition Labour Party, stood side-by-side and laid flowers as they paid tribute to the long-serving lawmaker, who was stabbed to death less than 24 hours earlier.
The slaying of the 69-year-old Conservative lawmaker at a regular meeting with local voters has caused shock and anxiety across Britain’s political spectrum, not least because it is reminiscent of the 2016 murder of Labour lawmaker Jo Cox by a far-right extremist in her own small-town constituency.
“He was killed doing a job that he loves, serving his own constituents as an elected democratic member and, of course, acts of this are absolutely wrong, and we cannot let that get in the way of our functioning democracy,” British Home Secretary Priti Patel said after paying her respects to Amess at the church where he died.
Patel said she has convened meetings with the speaker of the House of Commons, police and U.K. security services to ensure “all measures are being put in place for the security of MPs so that they can carry on with their duties as elected democratic members.”
Tobias Ellwood, a Conservative lawmaker who gave first aid to a police officer stabbed at the gates of Parliament in 2017, said face-to-face meetings with voters should be temporarily halted, as they were during the recent coronavirus lockdowns, and replaced with online interactions.
Amess suffered multiple stab wounds in the attack during his constituency meeting in the church in Leigh-on-Sea, a quintessentially English seaside town 40 miles (62 kilometers) east of London, that has become a magnet in recent years to those tired of life in the capital.
The Metropolitan Police said its early investigation “revealed a potential motivation linked to Islamist extremism,” without providing any details about the basis for that assessment. As part of the investigation, officers were searching two locations in the London area.
Amess, who had a wife and five children and was knighted by Queen Elizabeth II in 2015, died doing what he’d done countless times — listening to the concerns of residents in his seaside constituency of Southend West, which incorporates Leigh-on-Sea.
Under Britain’s parliamentary system, lawmakers have direct links with their local voters, often hosting open meetings, or “surgeries.” The meetings often take place in local churches and community halls and are publicly advertised. Amess himself posted online where he would be hosting his surgery on Friday.
“The reason he wanted to use the church was because he wanted to be where the people were,” said Rev. Clifford Newman at the Belfairs Methodist Church where Amess was killed. “And if you come to somewhere which is in the locality like Belfairs, as opposed to some ivory tower somewhere, people are more likely to feel easier, freer and more likely to open up to him.”
At the meetings, the topics raised can range from national matters such as the government’s handling of the coronavirus pandemic to more mundane issues such as requests for speed bumps on busy roads or a dispute over a neighbor’s fence. While members of Parliament don’t necessarily have the power to fix the problems directly, they can pressure officials at the national and local levels to get things done.
“I feel as if I have lost a family member. I feel that he was the family of Southend, he was the leader of Southend,” resident Erica Keane, 69, said. “And he was everywhere! He was at the football pitches, he was in the choirs, he was in the pubs. He was everywhere and he was Southend.”
Amess was clearly a popular lawmaker, winning 10 out of 10 elections since 1983. He was a social conservative on issues like capital punishment and abortion, an active supporter of animal rights and campaigned tirelessly on health matters such as obesity.
While never serving as a government minister, Amess was a fixer, a lawmaker able to forge alliances across the political divide. His door was seemingly always open to any new politician facing the centuries-old parliament.
Friday’s killing renewed concern about the risks politicians run as they go about their work. British politicians generally are not given police protection when meeting constituents — unlike the high-security measures that are in place in Parliament.
But the vitriol directed towards them has escalated in recent years, with many blaming the more polarized atmosphere on social media and the political divisions stoked by Britain’s departure from the European Union.
“We want to be accessible and approachable, but recently there has been more and more violent abuse,” Labour lawmaker Tanmanjeet Dhesi said. MAYUKO ONO & PAN PYLAS, LEIGH-ON-SEA, MDT/AP