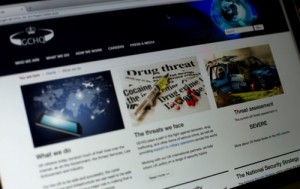 A page of the British GCHQ official website, the government electronic and communications spy agency

The new head of Britain’s electronic eavesdropping agency said U.S.-
based social media have become the command and control network of choice for terrorists and criminals and that tech companies are in denial about its misuse.
Writing in yesterday’s Financial Times, Robert Hannigan said that GCHQ and other British intelligence agencies know that IS extremists use messaging services like Facebook and Twitter to reach their peers with ease. He said spy agencies need to have greater support from the U.S. technology companies which dominate the Web in order to fight militants and those who host material about violent extremism and child exploitation.
“However much (tech companies) may dislike it, they have become the command-and-control networks of choice for terrorists and criminals, who find their services as transformational as the rest of us,” he wrote. “If they are to meet this challenge, it means coming up with better arrangements for facilitating lawful investigation by security and law enforcement agencies than we have now.”
He also said intelligence agencies need to enter the debate about privacy rights and that the debate shouldn’t be a reason for postponing urgent and difficult decisions.
“To those of us who have to tackle the depressing end of human behavior on the Internet, it can seem that some technology companies are in denial about its misuse,” he said. “I suspect most ordinary users of the Internet are ahead of them: they have strong views on the ethics of companies, whether on taxation, child protection or privacy; they do not want the media platforms they use with their friends and families to facilitate murder or child abuse.”
While terror propaganda is not new on the Internet, authorities say the rise of the IS group and the proliferation of al-Qaida offshoots has multiplied its message, reaching an even broader audience through its sophistication and familiarity with the media. Danica Kirka, London , AP