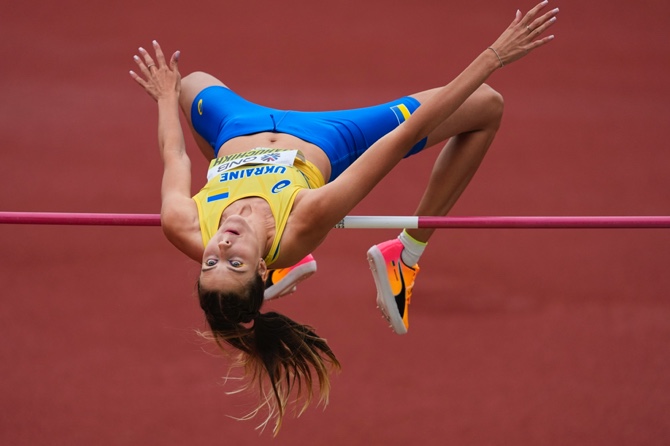 Yaroslava Mahuchikh, of Ukraine, competes during qualifying for the women’s high jump at the World Athletics Championships, Saturday

It took her three days by car to escape from Ukraine after the war started. Champion high jumper Yaroslava Mahuchikh can only guess at how long it will take to get back.

On her way out, Mahuchikh heard gunfire and could sometimes see shells raining down miles away. Though her hometown of Dnipro was far from the front lines of the Russian invasion, she could never shake the fear that when she said goodbye to her mom and dad and grandfather and sister, it might have been for the last time.

“When a war is going on,” Mahuchikh said, “it’s highly complicated to say that any city is safe.”

Four months after that harrowing trip to cross the border in Serbia, the 20-year-old is at the track and field world championships, a world away in Eugene, Oregon.

She easily made it through qualifying Saturday, and is a favorite to win a gold medal Tuesday in part because her main rival, three-time world champion Maria Lasitskene, is Russian and not allowed to compete because of the war.

World Athletics President Seb Coe said that given the difficulties the 22 Ukrainians competing in worlds have endured simply to make it to this point, it would be “inconceivable” to think the Russians would’ve been allowed here to go up against them.

Mahuchikh agrees. In a series of in-person interviews and email exchanges with The Associated Press, she said that though the relationship between herself and Lasitskene was always cordial, it was never warm. Now, it might never be repaired.

“She wrote that she can’t compete because she’s Russian,” Mahuchikh said of Lasitskene’s recent open letter that criticized Coe and International Olympic Committee President Thomas Bach. “And our people die because they’re Ukrainian. I don’t want to see, at the track, killers. Because it’s really killers, a lot of sportsmen who support this war.”

There are some Russian athletes who have backed the war, led by a handful of gymnasts including Ivan Kuliak, who wore a “Z” symbol in support of the war while standing only steps away from a Ukrainian athlete on a medal podium at a recent World Cup event. Shortly after, gymnastics officials stripped the medal from Kuliak and suspended him for a year.

Other Russians have promoted peace, including tennis player Daniil Medvedev, who was barred from competing at Wimbledon this year, and Alex Ovechkin, who plays for the NHL’s Washington Capitals.

In her letter, Lasitskene, who won last year’s Olympics to go along with her three straight world titles, commiserated with the plight of the Ukrainian athletes. They “are experiencing what no one human being should ever have to feel,” she wrote.

She also said keeping Russians out of sports did not stop the war “but on the contrary, it gave birth to a new one, around and inside the sports, which is impossible to contain.”

Missing in Lasitskene’s correspondence, Mahuchikh said, has been outreach to the Ukrainians themselves.

“Russia is an aggressor country that launched a full-scale invasion of my country,” she said. “Many coaches and athletes have gone to the Army to defend our country; some are in hot spots, and some are imprisoned or killed. Sports infrastructure in many cities is destroyed. We can’t train in our native country.” EDDIE PELLS, EUGENE, MDT/AP