Louis van Gaal had little time to savor delivering Manchester United’s first trophy since the Alex Ferguson dynasty ended three years ago.
Within an hour of collecting the FA Cup after Saturday’s victory over Crystal Palace, Van Gaal left his jubilant players to be faced with more uncertainty about his United future now the season is over.
For six months United has not challenged the veracity of reports that the American ownership will ditch Van Gaal before his third season in charge and bring in Jose Mourinho. United’s leadership still remained silent on Saturday, rather than publicly backing Van Gaal.
Just before Van Gaal entered the Wembley Stadium news conference after the 2-1 victory over Palace in extra time, fresh reports emerged that Mourinho’s hiring was inching closer.
“I don’t want to talk about leaving,” Van Gaal responded when it was highlighted that United hasn’t denied it plans to recruit Mourinho.
Mourinho did not comment when approached by reporters at a boxing event in London on Saturday. Fired by Chelsea in December, Mourinho told The Associated Press last week that he would sign a contract with a new team by the end of next month.
Van Gaal had the air of a manager on the way out during a combative exchange with reporters at Wembley. The 64-year-old Dutchman delivered a defense of his United reign and claimed internal restrictions prevented him from achieving more this season. United failed to achieve its ultimate goal of Champions League qualification after finishing fifth in the Premier League. 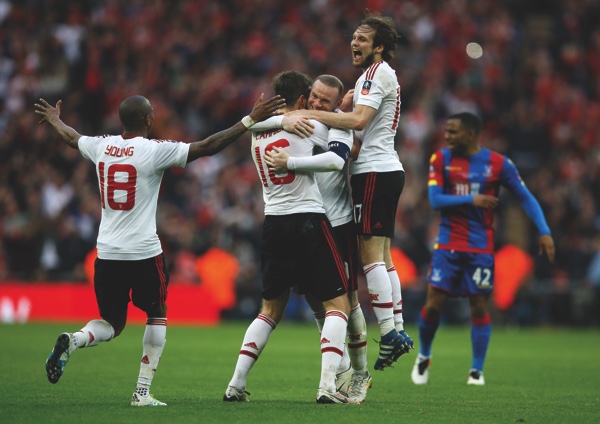 Asked about targets for next season if he stayed in charge, Van Gaal responded: “That’s dependable because also last season I have asked for players but you don’t think that the players I have asked [for] have come.”
Van Gaal complained that clubs more than double the cost of players when the record 20-time English champions make an approach. “I need the players that I have asked [for],” he said. “I have said I want creative, fast wingers […] and we didn’t do that because it was not possible.” Clicking his fingers, Van Gaal said: “You are thinking everything is possible at Manchester United. No. I’m sorry. It is not.”
Nor does winning the world’s oldest football cup competition necessarily guarantee keeping your job. What Van Gaal has done — largely due to injuries — is adhere to the club’s traditions of utilizing academy graduates. One produced the winning moment in extra time as Jesse Lingard netted five minutes after United was reduced to 10 men in the 135th FA Cup final.
The Palace defense only half-cleared Antonio Valencia’s cross and Lingard volleyed into the top corner of the net to complete United’s comeback.
“We’ve had a tough end to the season but I thought we worked very hard today — our determination got us through this so I’m delighted,” United captain Wayne Rooney said.
United showed the fighting spirit often lacking under Van Gaal to provide a winning end to the campaign.
It is the first time United has won the FA Cup since 2004 — one of 38 major trophies Ferguson won as manager from 1986 to 2013. Ferguson’s immediate successor, David Moyes, was fired after less than a year in charge. Van Gaal has managed to end the club’s rare trophy drought, and the Dutchman has titles in four countries in management. Rob Harris, London , AP