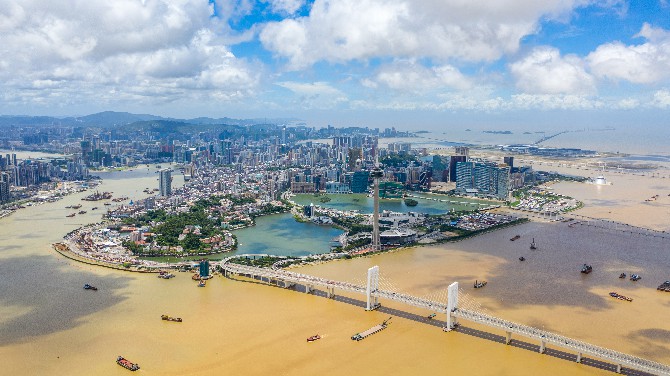 Lawmakers have again raised concerns about new urban developments disturbing views around Macau, particularly by Alto de Coloane and in the Nam Van Lake area.
Yesterday, government representatives led by the Secretary for Transport and Public Works, Raimundo Arrais do Rosário, heard lawmakers’ opinions on the Urban Master Plan, released for public consultation at the end of last week.
Most of the city’s lawmakers were present at the meeting and they raised questions regarding various topics, including the Alto de Coloane housing project, integrated usage of different districts, the LRT Macau Peninsula line and the new Urban Zone.
According to the plan, Alto de Coloane will have a cluster of residential buildings, including both high-rise buildings and standalone houses. However, lawmakers including Sulu Sou said yesterday that they believe that Coloane should be protected from high-rise development and should not have any more housing projects.
These lawmakers are also worried about the land plots called C, D and E in the Nam Van Lake area, which will have developments as tall as 65 meters and be used to house government offices. They worry that these projects will disrupt the views of the waterfront and Penha Hill.
However, the Cultural Affairs Bureau’s (IC) representatives pledged that these projects will not pose a threat to this area’s sightseeing views. Rosário also promised to review the details when the related plan is carried out.
Under the Urban Master Plan, Macau is categorized into 18 districts. These districts will serve different purposes, such as commercial, industrial and residential, however a single district can be used for several purposes.
Among the other aspects discussed by lawmakers yesterday:
— The LRT East Line will result in land reclamation. In order to build the LRT East Line to Taipa, the government will be implementing a reclamation project in the adjacent sea area to expand the road.
— The New Urban Zone will consist of 32,000 public houses. Secretary Rosário believes this will be sufficient to accommodate the demand for public housing in Macau, though not all lawmakers agreed.
— Avenida de Venceslau de Morais to be transformed into a commercial area. The predominantly industrial area will be remodeled, but Secretary Rosário is not sure whether the transformation can be completed within the next decade.
— There are no planned cultural facilities for the northern district. Lawmakers highlighted the fact that the plan does not include more cultural facilities in the northern and eastern districts. The government admitted to having “little recreational facilities planned for the northern districts” and that most of the city’s large-scale cultural projects are in Taipa. This will be improved in future, the government representative promised. Staff reporter