The government’s urban development plans for the next 20 years were unveiled yesterday when the public consultation document was presented by the interdepartmental group in charge of the Urban Master Plan.
With major focuses on the city’s reorganization and establishing regional and international link areas, housing and public infrastructure will take the lead role and define the uses of current and planned land.
According to the government’s estimations, by 2040, the Special Administrative Region will possess a total area of 36.8 square kilometers where 808,000 people will live.
Taking these predictions into account, the government defined the percentages for each of the eight categories that would occupy the land. The three major categories are public infrastructure, housing and green ecological areas, occupying 23%, 22%, and 18% of the land respectively.
According to Chan Pou Ha, the director of the Land, Public Works and Transport Bureau (DSSOPT), land usage was defined according to three principles: the current urban situation, mixed usage of the lands, and a balance between employment and housing. This is an attempt to reorganize the city so that residents would have fewer transportation needs and reduce lengthy, time-consuming trips between home, work and school.

Urban renewal focused on industrial swap
One of the highly anticipated topics of the Urban Master Plan was its connection with the government’s intentions of moving forward with urban renewal.
The focus is not the housing buildings of the old neighborhoods, but a reorganization of the areas occupied by industrial sectors, and an industry swap from light industry to high technology.
Two areas of the city are planned to change significantly in appearance and purpose. The first is Avenida de Venceslau de Morais, which currently has the most warehouses and small industries operating from old industrial buildings. This area will receive a facelift, giving way to modernization and a change of sector. It will be dedicated to housing as well as commercial activities to “reduce the impact of the industrial activity in the residential areas and improve the global environment in the neighborhood,” the government said.
Another area to be transformed is the Inner Harbor, where the old piers will be revitalized as a leisure and tourism coastal attraction. The project includes significant changes to the piers, buildings, and even traffic, as some streets along the waterfront will be transformed into pedestrian and esplanade areas.
The government also aims to modernize the industry and relocate them to other areas of the region, namely to a new industrial area of Pac On. It will reuse the old Pac On industrial park and incentivize the swap from industrial activity to high technology, making good use of the new plans to transform the area, which is a major transport hub in Macau. 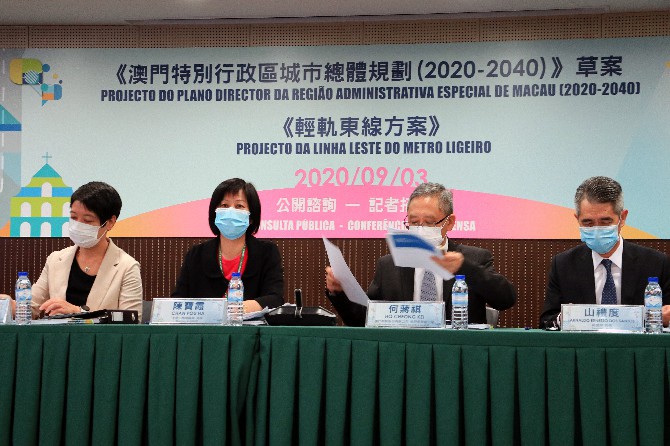 Multi-transport hubs to connect regionally
Another area of the government’s Urban Master Plan is the integration of all transport into hubs to allow fast transportation between several areas of Macau. It will also facilitate transport in and out of Macau, either with connections to the cities of the Greater Bay Area (GBA) or internationally.
The government aims to increase links between the international airport, which will undergo further expansion, and maritime transport via the Taipa Maritime Terminal, the Light Rapid Transit (LRT) system, and the Hong Kong-Zhuhai-Macau Bridge (HKZMB) Port.
This plan includes not only the fourth bridge between Taipa and Zone A of the new landfills, but also the new LRT East Line which will connect the Pac On area to the Border Gate while passing through the HKZMB and all of Zone A.
The government says this is part of Macau’s regional integration, aiming to link Macau to the major cities of the GBA within one hour.
Locally, the government has also proposed categorizing the different roads of Macau. This will create an inter-zone network and define a series of main-road links to promote traffic detouring away from certain areas of the city. This will also include optimization of pedestrian accesses via under or upper passages for main-road crossing, creating an effective pedestrian system.
Final results
expected in one year
The public consultation on the Urban Master Plan starts today and will last for 60 days, until November 2. The final results of the Urban Master Plan will only be known in about one year, the director of DSSOPT said in a reply to the media.
As Chan explained, “now we are going to have 60 days of public consultation, which will follow a period of 180 days for the company responsible for the consultation to elaborate [on] their preliminary report.”
“Then this report will be submitted to the Urban Planning Council [CPU], which will have to analyze it and also provide comments. In the final stage, the consultant will have 90 days more to finalize the report with input from CPU, presenting a final version that will then be delivered to the Chief Executive,” she said, noting that this should occur by September 2021.