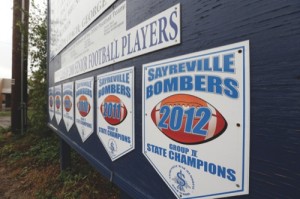 Banners for state championships for the Sayreville War Memorial High School football team are lined up on a sign along Main Street in Sayreville, N.J.

Seven teens face sex crime charges as a solidly middle-class town and its beloved high school football program find themselves at the center of the broader debate over how to deal with hazing.
Hazing generally involves endurance rituals to which prospective members of an organization are subjected. The school’s superintendent says abuse by the Sayreville War Memorial High School students was so pervasive he had no choice but to call off the season for a football team that has won three sectional titles in four years. His decision angered team parents but drew applause from advocates who called it the kind of bold stand necessary to confront hazing.
Hundreds of people came out for an anti-bullying rally Sunday evening in a park across the street from the high school. Organizers said the goal of the event is to promote unity and healing within the community, as well as to show support for the victims of bullying. Participants were given balloons, ribbons, stickers and candles. They were asked to walk around the lake at Kennedy Park and eventually release the balloons or show other forms of support.
No coaches have been charged, and it isn’t clear if any knew about the alleged incidents. In his first public comments, head coach George Najjar told the Star-Ledger of Newark on Saturday that he would comment on the allegations but that “now is not the time.”
Najjar could not be reached by telephone Saturday evening.
The allegations involved attacks on four students over a 10-day span last month, authorities said. Six defendants were arrested Friday and the seventh surrendered Saturday. Their names were not released because they are juveniles.
One of the attacks involved sexual penetration upon one of the alleged victims, Middlesex County prosecutor Andrew C. Carey said.
In a statement on the arrests, Superintendent Richard Labbe said the district will “come together as a school district and greater community to harness the strength required to support the young men who may have been victimized and then to begin the healing process for our beloved community.”
Stuart Green, founder of the New Jersey Coalition for Bullying Awareness and Prevention, praised Labbe’s decision as one that could change the conversation on the issue of bullying.
Though he sympathized with those who feel it unfair to punish an entire team, Green said responsibility for such conduct generally extends beyond the individual players.
“When these problems arise they’re never primarily a function of the individual kids or players,” he said. “These problems primarily arise because of the behaviors of the adults and leaders who manage these environments.”
The arrests came four days after the rest of the season was called off, prompting angry responses from parents of players. At an emotional school board meeting Tuesday night, some players denied seeing any of the alleged incidents occurring, and one parent said the cancellation “victimizes the kids who had nothing to do with it.”
Reports of hazing surface regularly around the U.S., but rarely do they result in a sports season’s cancellation.
One well-publicized exception was Mepham High School on New York’s Long Island, which canceled its 2003 season after reports of alleged sexual assaults by upperclassmen on younger players during a preseason trip to Pennsylvania.
Steve Timko, executive director of the New Jersey State Interscholastic Athletic Association, said he couldn’t recall any seasons being forfeited because of hazing-related allegations in his 38 years involved with scholastic sports in the state.
Hazing can be hard to define and harder to detect precisely because it occurs within the confines of a closed group such as a team, fraternity or sorority that wields it as a requisite for inclusion, experts say.  David Porter, Sean Carlin, AP