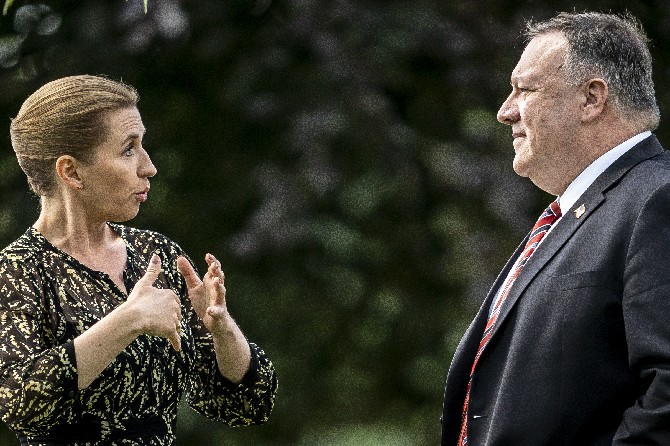 The Trump administration yesterday [Macau time] named a special envoy for the Arctic, filling a post that had been vacant for more than three years as the administration seeks a greater role in the region and tries to blunt growing Russian and Chinese influence there.
The State Department’s appointment of veteran career diplomat Jim DeHart to be U.S. coordinator for the Arctic came just a week after Secretary of State Mike Pompeo vowed enhanced U.S. engagement in the Arctic on a visit to Denmark and a month after the White House ordered the construction of a fleet of new icebreakers to ply the region by 2029.
The U.S. opened a consulate in Denmark’s semi-autonomous territory of Greenland earlier this year as part of its new Arctic strategy, and Pompeo met with officials from Greenland and the Faroe Islands while he was in Copenhagen.
The opening of the consulate in Greenland attracted attention because of President Donald Trump’s stated interest last year in purchasing it from Denmark, which drew strong objections. Although that possibility is off the table, the U.S. has announced a $12 million aid and development package for Greenland that DeHart will help shepherd, according to officials.
Pompeo has spoken in the past about the Trump administration’s determination to prevent Russia and China from playing a dominant role in the Arctic, which is heavily affected by climate change. Russia has expanded military bases in its Arctic regions, and China has sought to declare itself a “near-Arctic nation” despite having no territory near the area.
Environmentalists criticized Pompeo last year when he spoke at an Arctic Council event in Finland and said the U.S. and others should exploit changes, including sharp reductions in ocean ice, for economic benefit, including the opening of new sea lines and greater opportunities for energy and mineral extraction.
DeHart’s appointment fills an empty slot in the department’s senior ranks that had been created during the Obama administration but remained vacant since President Donald Trump took office and the previous coordinator, retired Coast Guard Adm. Robert Papp, stepped down.
“The United States plays a critical leadership role on Arctic issues within the international community and remains committed to ensuring a peaceful region where U.S. interests are safeguarded, the U.S. homeland is protected, and Arctic states work cooperatively to address shared challenges,” the State Department said in a statement.
DeHart is 28-year foreign service officer and was most recently senior adviser for security negotiations and agreements. He had been leading discussions with South Korea over the continued presence of U.S. troops there. He has also served as the No. 2 diplomat in Norway, which has extensive Arctic interests. MATTHEW LEE, WASHINGTON AP